This article presents the 20 longest bridges in the world, in terms of length, listed in descending order. 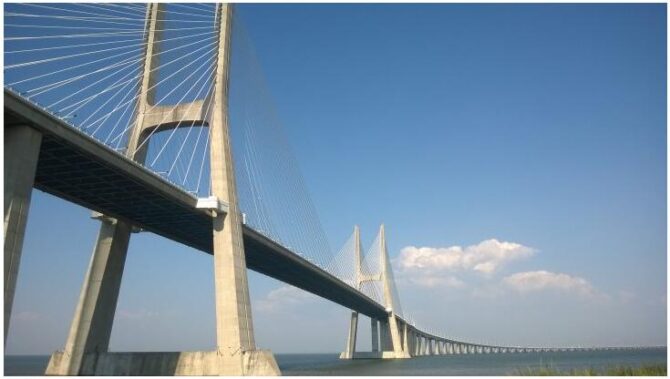 Portugal appears in the list in 16th place, with the Vasco da Gama Bridge

According to its length, the longest bridge, the Danyang-Kunshan Bridge, is located in Shanghai, China, and corresponds to a 164.8-kilometer long viaduct on the Beijing-Shanghai High Speed ​​Line. This bridge began to be built in 2006 and was inaugurated on June 30, 2011. Also in China, the Tianjin Bridge occupies the second place on the podium, totaling 113.7 kilometers in length. Its opening took place on the same day as the longer bridge, as both are part of the Beijing-Shanghai High Speed ​​Line. The podium ends with a bridge in Thailand that is 55 kilometers long, the Bang Na highway.

Portugal appears in the list in 16th place, with the Vasco da Gama Bridge, which connects Montijo and Alcochete to Lisbon and Santarém, with 17.18 kilometers in length. In fact, it should be noted that the only two longest bridges in the world present in Europe are located in Portugal and Russia (Kama Bridge).

It is also important to realize that of the 20 bridges presented, eight are located in China and four in the USA, that is, it is in these two countries that more than 50 percent of the largest bridges in the world are located.