In June 2006, the International Mission for Press Freedom called Gayoom the government to suspend its arbitrary arrests and intimidations to which journalists and dissidents are exposed.

Four «Tamil Tigers», members of the LTTE in Sri Lanka were sentenced in May 2007 to 15 years in prison in the Maldives for arms smuggling. The Tamils ​​had been arrested by the Coast Guard at one of the atolls in the southern Maldives.

Gayoom’s 2005-06 democratic reforms led to general elections in 2008. The presidential election brought Gayoom himself to decline after 30 years as president. He was replaced by Mohamed Nasheed of the Maldives Democratic Party, who in the 2nd round of elections won over Gayoom by 53.7% against Gayoom’s 45.3. In the first round of elections, Gayoom had gained 40.3% against Nasheed’s 24.9%, so almost the entire opposition was skipped over on Nasheed’s side. Nasheed faced persecution by the regime in the 1990s and was repeatedly jailed on false charges. In 2003, he went into self-elected exile and founded the Democratic Party of the Maldives, to return home in 2005. He was immediately put in jail, charged with terrorism. The Maldives has like Denmark and the rest of the world after 2001 introduced anti-democratic legislation to persecute political opponents.

Due. its low location, the Maldives is one of the countries in the world most at risk from the rising seas due to global warming. The country’s highest point is 2.3 m above sea level. In March 2009, therefore, President Nasheed announced that over a 10-year period, the country will replace its fossil energy use for wind and solar energy. He noted that the expenditure was not expected to be greater than the country’s already spending on importing fossil fuels. In October, he chaired the world’s first underwater ministerial meeting in protest of global climate change.

On May 1, 2011, protests took place in Malé against rising food prices, the poor economic situation and demanding the president’s departure. The protests continued the following days with some thousands of protesters clashing with police, who in turn used tear gas and spells.

In December, an opposition alliance – Madhanee Ithihaad – was formed, which also included the parties that had otherwise supported the president in the 2008 election. On December 23, the alliance held a meeting of 20,000 participants. On January 16, 2012, at the president’s request, the military arrested Chief Judge Abdulla Mohamed of Malé’s criminal court on charges of obstructing the investigation of corruption and human rights violations under former President Gayoom. The arrest was the start of a new wave of opposition protests. The turmoil reached a tentative peak on February 6 when police joined the protesters and refused to disperse the demonstrations. On the morning of the 7th, protesters and police attempted to storm the military headquarters, and the president ordered the soldiers to use rubber bullets against protesters and police trying to storm the headquarters. A few hours later, Nasheed stepped back in front of rolling cameras, claiming he was threatened to do so. His Vice President Mohammed Waheed Hassan then took over the presidential post. Nasheed’s supporters claimed there was a coup d’état, but the circumstances remained unclear. In contrast, police cracked down unusually hard on demonstrations organized by Nasheed’s supporters. Waheed attempted on February 11 to form a unity government in which Nasheed supporters also joined, but it was rejected by these. New elections were scheduled for July 2013.

In February 2013, juvenile justice sentenced a 15-year-old girl to 100 whips for extramarital sex. She had been raped by her stepfather and had given birth to a son. The cruel verdict led to national and international protests and was overturned by the High Court in August.

Nasheed was arrested in March 2013 for his warrant for arrest by the chief judge in January 2012. The arrest prompted Amnesty International to declare that former dictator Gayoom had never been arrested – even after his defeat in 2008.

The presidential election was held in September 2013. It was won by Mohamed Nasheed who got 45.5% of the vote, followed by Abdulla Yameen who got 25.4%. In November, the second round of elections was conducted. Nasheed had to settle for 48.6% here. Yameen gained 51.4% and was in office later that month.

In January 2014, Interior Minister Umar Naseer ordered the country’s prisons to prepare for the execution of death sentences over those sentenced to death. The order sparked international protests. It would be the first time in 60 years the verdict was enforced in the Maldives, Amnesty International said.

In March 2015, the country’s opposition leader Mohamed Nasheed was sentenced to 13 years in prison by the regime. The month before, he had been corporally dragged into court by armed police.

In July 2015, a new land law was passed that, for the first time in the country’s history, allowed foreigners to buy land in the country – provided they invested over $ 1 billion. US $ and that 70% of the purchased “land” was recovered from the sea. Critics feared the law would open up a Chinese military base in the country. Throughout 2014, the Maldives sought closer relations with China and supported the country’s plans for a maritime Silk Road through the Indian Ocean. A Chinese base will encounter considerable opposition from both India and the United States. 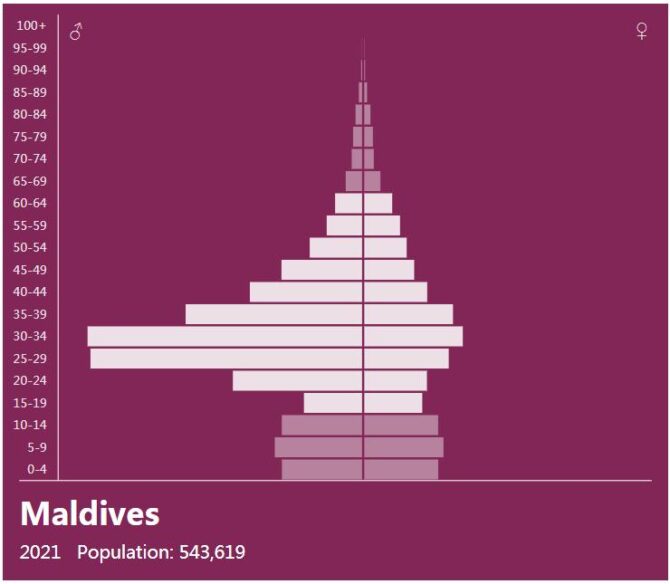