Malaysia. The controversial trial of former Deputy Prime Minister Anwar Ibrahim resumed in January. He was charged with committing homosexual acts, a serious crime under Malaysian law. The defense claimed that the charges were invented in a political conspiracy against Anwar Ibrahim. He had been dismissed and imprisoned in 1998 after criticizing Prime Minister Mahathir bin Mohamad for corruption.

In March, former police chief Abdul Rahim Noor was sentenced to two months in prison for an assault on Anwar Ibrahim in 1998. Rahim has since admitted the prosecutor’s side agreed to mitigate the prosecution and thereby reduce the sentence. Doctors testified that Anwar Ibrahim was close to being killed.

In March, the government restricted the opposition newspaper Harakah’s opportunities to come out only twice a month. Harakah’s editor-in-chief was one of several leading people in the opposition who had been prosecuted just for the uprising. Another was Anwar Ibrahim’s chief lawyer.

In April, a demonstration was held in favor of Anwar Ibrahim in Kuala Lumpur. Kravall police dissolved the protest with tear gas and water cannons, and many opposition activists were arrested.

Four international advocacy organizations criticized the government in April for interfering with the country’s judiciary. Particular concern was expressed about how a corruption trial against Anwar Ibrahim was carried out the year before. The same month, former Prime Minister Musa Hitam was appointed chairman of a new Malaysian human rights organization. During his active time, Musa was Mahathir’s foremost opponent in the UMNO ruling party.

Criticism of the judgment came from, among other things, The governments of Australia, New Zealand, the United States of America and Singapore, as well as of the International Law Commission, which described the trial as politically motivated. A Malaysian protest demonstration in November was dissolved by tear gas police. It was led by Anwar Ibrahim’s wife, and the demands were his freedom and the departure of Prime Minister Mahathir.

Heavy monsoon rains in the fall made more than 8,000 residents homeless in northeastern Malaysia. At least ten people lost their lives.

Under Mahathir’s leadership for 22 years, Malaysia achieved a standard of living which is among the highest in Asia. He has received much of the credit that a backward agricultural country with a sensitive ethnic balance under his rule was transformed into an Asian “tiger economy”. The back of the medal was a corrupt judicial system and restricted freedom of the press.

Development of infrastructure has been central. Petronas Towers was completed in the capital Kuala Lumpur in 1996; at that time the tallest building in the world with two towers of 88 floors (451.9 meters). Among the government’s mega projects was the high-tech Multimedia Super Corridor, a Malaysian “Silicon Valley” stretching from Kuala Lumpur’s new airport to Petronas Towers. The Cyberjaya IT center was opened in 1999. Kuala Lumpur’s new international airport was put into operation in 1998 at a cost of around NOK 25 billion. Another very ambitious project was a new administrative capital, Putrajaya, 30-40 kilometers south of Kuala Lumpur. Putrajaya is estimated to cost around NOK 70 billion.

Construction of Asia’s second-largest hydropower plant, the Bakun Dam in Borneo, started in 2002 after postponement due to the Asian financial crisis in 1997. The project has been met with protests from environmental activists worldwide; About 10,000 indigenous people have been forced to relocate. Currently, the project is estimated to cost NOK 45 billion – 2400 megawatts to be transmitted via the world’s longest subsea pipeline (670 kilometers) to the Malaysian mainland. The completion was expected to happen in 2015, but was postponed.

In the country’s market economy, the state has assumed an active governing role, with a tangible interaction between political and economic power. Oil production, with the bulk of the sea offshore Borneo, has contributed significantly to the country’s economic progress. In 1997, Malaysia was hit by the Asian economy crisis, but less severely than neighboring states. Unlike neighboring countries, Malaysia failed to follow the IMF guidelines and advice. The economy is highly export-oriented. Fluctuations in demand for electronics products, not least from the US, have had a significant impact since the turn of the millennium, especially during the global financial crisis in 2008.

On 31 August 2007, Malaysia marked its 50th anniversary as an independent nation with the launch of a new long-term plan. It has as its stated goal that by 2020 Malaysia will be a fully developed industrial nation.

The most ambitious part of the long-term plan is the Iskandar Development Region (IDR), farthest south of Malaysia at the Singapore border. This is where construction of a brand new city for the future-oriented industry started in 2007, Nusajaya. The project management set the goal that by 2025 Nusajaya will be “the most modern industrial metropolis in Southeast Asia”. Investments are currently estimated at $ 100 billion over 20 years. A significant part of the investments will be financed by revenues from the oil sector – in 2007, oil and gas accounted for more than 20 per cent of the state’s revenues. However, the global financial crisis led to the giant project being subject to cuts and reassessments. In 2007, Malaysia recorded USD 9.4 billion in foreign direct investment, compared with NOK 6 billion in 2006. A further increase was expected in 2008 with a view to the IDR project, but failed.

During the 50th anniversary, it was pointed out that Malaysia has reduced the proportion of the population living at or below the poverty line, from 22.8 percent in 1990 to 5.7 percent in 2006, according to official statistics. However, the financial crisis has also set a backlash for the poverty struggle.

A major campaign against illegal guest workers has received heavy criticism. Immigrants without a residence permit can risk fines, imprisonment and even whipping. Of Malaysia’s total workforce of about 10 million, almost two million have been guest workers, but only half of these have had residence and work permits. With hundreds of thousands of arrests and deportations, the campaign has led to a strained relationship with neighboring countries, especially Indonesia.

Malaysia was ranked 62 out of 187 countries on the UN Living Index for 2013. The country was ranked 50th out of 174 countries on Transparency International’s corruption index for 2014. Corruption poses a significant problem: Malaysia was one of four countries blacklisted in 2009 by the Organization for economic cooperation and development (OECD) for lack of willingness to cooperate in tax matters. 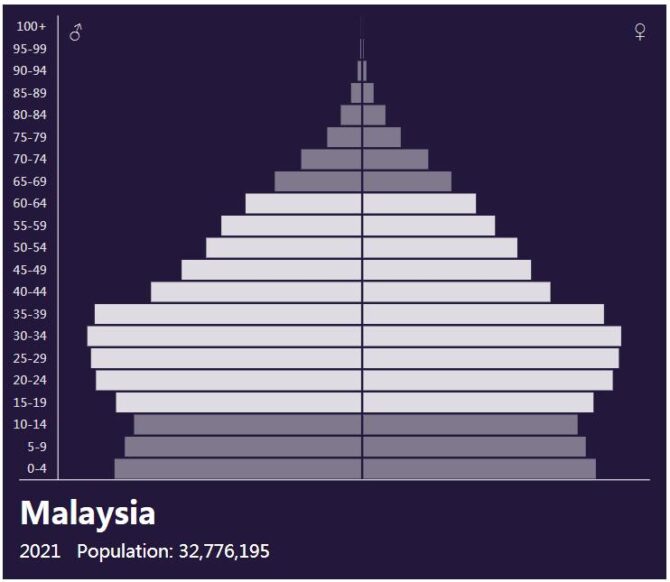