Uganda. Uganda’s ambitious economic reform program was rewarded during the year with debt relief and new multi-billion dollar credits. The proportion of poor people in the population has dropped significantly during the 1990s, and Uganda, like few other African countries, has managed to get almost all children to attend school.

Political reforms, on the other hand, seem distant. More than 90% of the participants in a referendum in June approved the partyless system. The principle that the country should be governed by an all-encompassing “Movement” aims to avoid the ethnic and religious violence that characterized the years 1971-86. However, the turnout was only 47%, and the opposition had called for a boycott.

About 1,000 members of a Christian doomsday cult were found dead in southwestern Uganda in March. Nearly 500 were burned inside the sect’s church, and as many were found strangled or poisoned in the surrounding area. They probably had been persuaded to abandon all property in the belief that the earth would collapse at the turn of the millennium. When they then demanded their assets back, they were murdered. The sect leaders were believed to have escaped.

An outbreak of Ebola disease hit northern Uganda during the fall. By the beginning of December, 156 people had died.

A WTO report showed that the Museveni government’s economic reforms have attracted foreign investment and contributed to growth in the country. As part of the reform, the trade sector has been liberalized. Up to 2001, GDP had risen by about 6% annually. The government deficit was reduced and so was inflation, which had improved the economic situation in the country. Agriculture accounted for about 42% of GDP and 80% of employment.

In March 2002, Uganda and Sudan entered into the fight against the LRA partisan movement, led by “Prophet” Joseph Kony, who wants to rule Uganda on the basis of the Bible’s 10 commandments. The movement has become entrenched in the border between the two countries and, as part of its tactics, is abducting thousands of Ugandan children made into child soldiers.

In October, the government evacuated 400,000 residents from the battle area before intensifying the fight against the LRA. In December, an agreement was signed with UNRF after 5 years of negotiations.

In May 2003, the last Ugandan forces withdrew from the Republic of Congo and were followed by tens of thousands of refugees asking for asylum in Uganda. In August, Uganda’s former dictator, Idi Amin Dada, died at a hospital in Saudi Arabia.

In February 2004, 200 people were murdered in a refugee camp in the northern part of the country by LRA rebels. The president declared that there had been a lack of military coordination.

Following pressure from the donor countries, the government showed a willingness to allow the country to develop towards a multi-party system. At the same time, the existing constitution made it impossible for Museveni’s participation in the next presidential election in 2006. A number of analysts now pointed out that it was possible that Museveni, while changing the constitution to a multi-party democracy, would introduce the possibility that he could stand for himself in 2006. 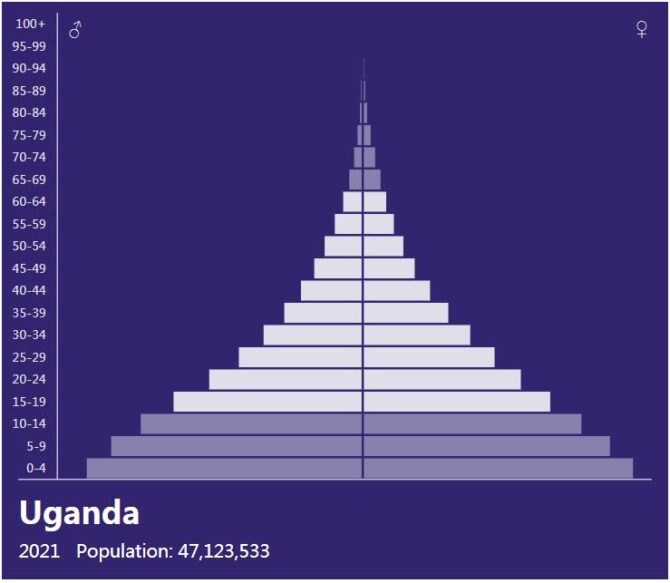