Congo. A standstill agreement concluded at the turn of the year seemed to have put an end to the civil war that broke out in 1997 and has been going on and off ever since. With Angolan military assistance, President Denis Sassou-Nguesso of northern Republic of the Congo defeated the militia organized by the former leaders of southern Republic of the Congo. Although a court in May sentenced two exiled politicians, former Prime Minister Bernard Kolélas and former Interior Minister Philippe Bikinkita, to death, the peace deal seemed to hold. Most of the approximately 800,000 people who fled the country during the war returned at the beginning of the year.

If peace holds in the long run, it appears when the promises of free elections will eventually be fulfilled. The optimism was nevertheless great and the construction work started immediately, albeit with scarce resources. The symbolic significance was given to the reopening of the 50-mile railway line between the capital, Brazzaville and Republic of the Congo’s economic center, the port city of Pointe-Noire. 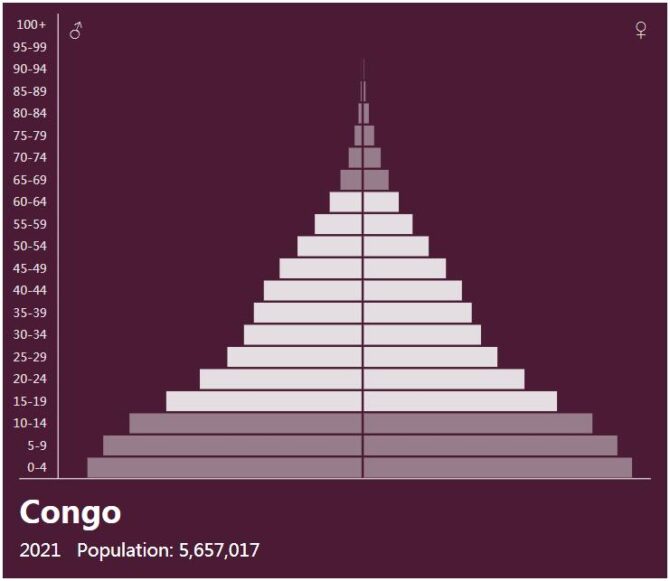 Congo, Republic of the Central West African State (between 1970 and 1991 called the People’s Republic of the Congo). Originally inhabited by pygmies and then occupied by Bantu peoples (today especially cowards and kongo in the South and in the Pool region, teke in the Center, m’boki and sanga in the North, etc.), the South of the od. Congo was included in the 15th-16th century. in the kingdom of Congo, which gave its name to a large region (and to two different African states today). Slave trade area, at the end of the 19th century. exported timber and rubber. Explored by P. Savorgnan de Brazzà, which he obtained from King Makoko Iloo of the teke a cession of sovereignty to France and founded the capital Brazzaville (1880), it became a French possession and a colony from 1910, included in French equatorial Africa. Part of the Franco-African Community in 1958 and Autonomous Republic in 1959, under the presidency of Fulbert Youlou, became independent on August 15, 1960. The country was constantly affected by a fundamental fracture between North and South, evident within the national leadership group . Pro-Western and supporter of the secession of Katanga, Youlou was forced to resign from popular demonstrations in August 1963. He was succeeded by Alphonse Massemba-Debat, who in 1964 made a socialist turn, establishing the single party (Mouvement national de la révolution, MNR) and a revolutionary militia, but coming into collision with part of the army. Militia and the military left carried out a coup in 1968, installing Captain Marien Ngouabi, a staunch Marxist from the north, who replaced the MNR with the Parti congolais du travail (PCT) and in 1970 renamed the country the People’s Republic of Congo. North-South tensions and widespread discontent were the background to the assassination of Ngouabi in March 1977, of which Massemba-Debat was accused, then executed. In 1977-79 Joachim Yhombi Opango was in power, who clashed with the left of the party and was replaced by Colonel Denis Sassou-Nguesso, from the north, who, in nominal loyalty to the socialist choices, implemented a pragmatic policy, reopening to the West and to France. The persistence of ethnic tensions (the northerners considered themselves marginalized anyway) and the growing economic difficulties led to serious factional conflicts, especially in 1987 when an insurrection was suppressed with French air assistance. Reaffirmed to the presidency in 1989, Sassou-Nguesso launched a liberalization of the economy and a national reconciliation, initiating reforms in the key of political pluralism and formally renouncing Marxism-Leninism (1990). A National Constituent Conference chaired by the Catholic Archbishop of Brazzaville drafted a new democratic constitution (1991). The name of the country returned to the Republic of the Congo. The presidential elections of 1992 were won by Pascal Lissouba who found an agreement with the defeated Bernard Kolélas only after bloody clashes. In 1997, in view of the subsequent elections, the confrontation between supporters of Lissouba and faithful of Sassou-Nguesso degenerated into a civil war, in which the militias linked to the two exponents engulfed Brazzaville in a conflict with tens of thousands of victims. In October Angolan troops intervened in support of Sassou-Nguesso, who proclaimed himself president. A peace agreement was reached only in 1999. Having been confirmed in 2002 in controversial elections, from which Lissouba and Kolélas were excluded, Sassou-Nguesso expanded his powers through a new Constitution, sparking clashes in the Pool region, which was opposed to him (2002-03). Sassou-Nguesso’s re-election in July 2009 was contested as fraudulent by the defeated candidates.