Qatar. In January, Qatar and Bahrain agreed to jointly investigate how to resolve the dispute over control of the Hawaiian Islands. Nevertheless, in May Qatar reported Bahrain’s action on the matter to the International Court of Justice in The Hague.

Thirty people were sentenced in February to life imprisonment for involvement in a coup attempt in 1996. 85 other suspects were released. Among those convicted were Hamad bin Jasim bin Hamad ath-Thani, a member of the royal family and former minister.

A Qatari passenger plane with nearly 150 passengers was hijacked on September 14 on a flight from Doha to Amman. The plane landed in Saudi Arabia, where the hijacker gave up.

In order to ensure control of oil production, the state oil company, Qatar Petroleum Producing Authority (QPPA), was established in 1972 and in February 1977 all foreign oil installations in the country were expropriated.

The economic development necessitated a massive immigration of foreign technicians and workers. Europeans and North Americans were brought in as technicians, and Iranians, Pakistanis and Indians as workers. The number of immigrant workers is difficult to make up as there is no census, but it is estimated at around 150,000 (half Pakistanis), which is about 60% of the population.

To avoid fundamental changes in local culture, the government preferred immigration from other Arab countries. Despite this, the immigrant labor is also protected by the country’s advanced social system. Iranian society lives under better conditions than in the other Gulf Gulf emirates, and this made Qatar the country with the fewest conflicts with Iran.

In accordance with OPEC guidelines, in 1982 the country reduced oil production by 75%. As a result, exports fell, forcing the government to reduce investment by “petrodollars” in the West and to reduce public spending. Furthermore, industrial expansion slowed down. Still, the country had an infrastructure that made it possible to meet the challenge. In the industrial area of ​​Umm Said there was a steel mill, which at the beginning of the decade produced 450,000 tonnes annually. In addition, liquefied gas production was started, and the government decided to proceed with a $ 6 billion project to use gas for energy purposes and desalination of seawater.

In 1981, Qatar, together with Bahrain, Kuwait, Oman, United Arab Emirates (UAE) and Saudi Arabia formed the Gulf Cooperation Council, a regional council for coordination of activities in politics, economics, the social sphere, culture and military.

In April 1986, a conflict erupted between Bahrain and Qatar over the artificial island of Fasht ad-Dibal. However, mediation by the Gulf Cooperation Council succeeded in resolving the conflict. At the same time, however, dozens of French military people were recruited and, in Qatars uniform, involved in the defense of the emirate. In November 1987, the country resumed diplomatic relations with Egypt.

Following Iraq’s invasion of Kuwait in August 1990 and the ensuing Gulf War, the Cooperation Council decided in March 1991 to suspend financial assistance to Jordan and the PLO – for their support of Saddam Hussein.

In the same month, the Foreign Ministers of the 6 member countries of the Cooperation Council signed an agreement with Egypt, Syria and the United States on security in the region. The plan contained four main points: joint military strategy between the United States and the Arab members of the coalition facing Iraq ; mechanisms to prevent the proliferation of weapons; the acceptance of a land in return for peace with Israel ; and a new economic development program for the region.

During the Gulf War, oil sources in Kuwait and Saudi Arabia were set on fire, and the thick clouds drifted over, among other things. Qatar and plagued the air. The heavy pollution of the air triggered acid rain and climatic changes in the region. Health experts confirmed that the burning oil sources produced large amounts of sulfur dioxide and soot, whose particles caused asthma, bronchitis and increased the risk of cancer.

In September 1991, private foreign companies initiated the exploration of huge deposits of natural gas along the coast of Qata. The reserves were estimated at 10,000 billion cubic meters.

In December, a group of 53 people – including several government officials – in a letter requested the emir on the conduct of free democratic elections, a written constitution and the extension of individual and political rights. The result was that several people were detained in the capital’s central prison, and only released after several months. 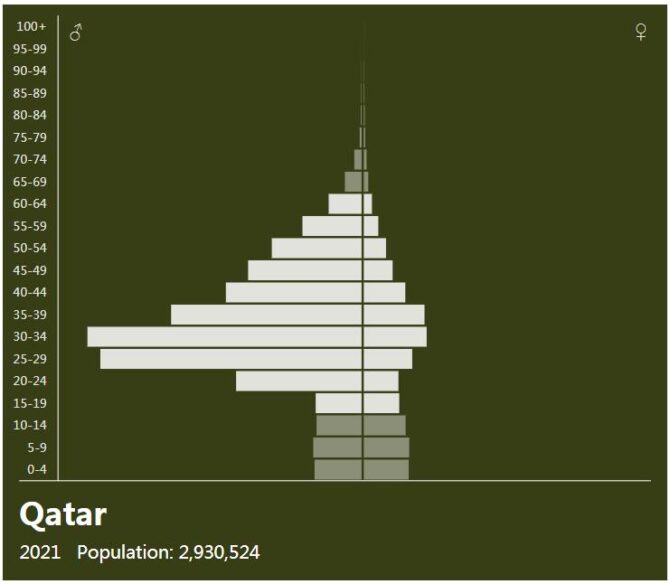