Nepal. The Maoist uprising that has been going on since 1996 continued to plague Nepal, and towards the end of the year, the revolt was reported to have claimed around 1,500 lives since its inception. Many of the victims were cops on individually located posts. At the same time, both the guerrillas and the government declared themselves willing to negotiate. The first meetings took place in October under mutual suspicion, and no concrete progress was reported.

The uprising indirectly contributed to the government under Krishna Prasad Bhattarai being forced to resign in March following an internal revolt within the ruling Congress party. A new Prime Minister was appointed 76-year-old Girija Prasad Koirala, who has held the same post three times before.

In June, the government banned the tourism industry from employing children under 14 as a labor force. In July, debt slavery was banned, a form of life trait where whole families are forced into so low-paying work for a landowner or industrial owner that they can never pay off the debts they are forced to take to live. The phenomenon had existed for generations, but only since hundreds of debt slaves traveled to Kathmandu to publicly demand their freedom did the government intervene and acquit them. More than 36,000 debt slaves were estimated to benefit from the reform.

Despite the political instability, the Nepalese economy continued to grow. From 3.5% in 2012, growth rose to 5% in 2011. At the same time, there was a drastic improvement in conditions for the country’s poorest. While in 2003, 53.1% of the population lived below the international poverty line of US $ 1.25 per person. Today, this percentage was more than halved in 2010 to 23.8%. An important part of the country’s GDP comes from money sent home by its workers abroad. With unemployment and underemployment of up to half the workforce, many Nepalese choose to work abroad, from where they send money home to the family.

After being postponed on several occasions for the completion of a new constitution, the Constitutional Assembly in May 2012 was dissolved by the President. In the weeks leading up to May 2012, a number of violent demonstrations were conducted in the area around Parliament. Demonstrations were banned and the army put on alert in case the police were unable to control the situation.

In September 2012, the United States decided to remove the CPN (M) from its list of terrorist organizations. The party had been on the US blacklist for 9 years. In October, the last of a group of 6,500 former CPN (M) partisans joined the country’s military. This was the result of an agreement between the political parties in November 2011.

In March 2013, Khil Raj Regmi was appointed Acting Prime Minister to hold parliamentary elections. The election was initially scheduled for June 2013 and then postponed until November. The choice of Regmi was a compromise between the major parties of Parliament. He has a past as Supreme Court President of the country.

Also in March, a law was set up to set up a Truth, Reconciliation and Disappearance Commission to investigate and place responsibility for human rights violations in 1996-2006. Yet two years later, however, the commission was not formed.

The country’s protracted political crisis is due to the ongoing struggle between the CPN (M) and the old rulers. These were the next two equal blocks facing each other, but the fight was now waged politically, not militarily. Work on the new constitution collapsed because the CPN (M) required the formation of 10-14 new provinces – predominantly according to ethnic guidelines. The CPN (M) supported a decentralization of power and greater autonomy for the many different ethnic groups in Nepal. This was counteracted by the Congress Party and the other old parties. 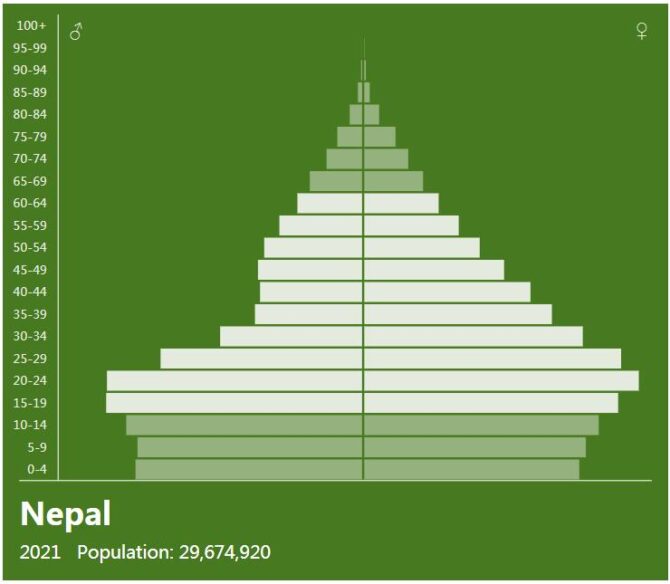