Micronesia Federation. 672 people were reported to have cholera at the end of May/June. Six people died as a result of the disease.

President Falcam received a warm welcome in September during his four-day visit to Israel. The countries already had a good relationship. Micronesia is one of Israel’s most faithful allies in the UN.

In February 1994, the President convened a national conference to discuss the long-term prospects for Micronesia’s economy. One of the themes debated was the country’s dependence on the United States, whose support accounts for two-thirds of GDP. The participants also dealt with the problems of fishing, tourism and the country’s poor industrial sector.

Olter regained the election in March 1995 and began his second term in office. He thus ignored the pressure for rotation in the presidential office, which could have allowed alternates from different parts of the country to take over the country’s highest office in turn. In April, the president officially criticized Japanese projects for the continued transportation of plutonium on ships across the Pacific.

In late 1995, 500 delegates from the Federal State of Micronesia met to discuss the future economic relationship with the United States, at the prospect of a free association agreement in 2001. The conference also proposed a number of financial measures and the promotion of the private sector. Finally, it was decided to make greater efforts to comply with state budgets.

In December 1996, a typhoon caused serious damage to private residential and state property. Furthermore, the crops were affected. US President Bill Clinton declared the area in emergency mode and decided to send relief.

In November, President Bailey Olter was replaced in the post by a transitional president, Jacob Nena, who in May 1997 was inaugurated as actual president. At the 1997 parliamentary elections, the 10 members who were up for election were re-elected.

Throughout the year, the country’s financial problems continued and the government sought to motivate 20% of public servants to find other work. 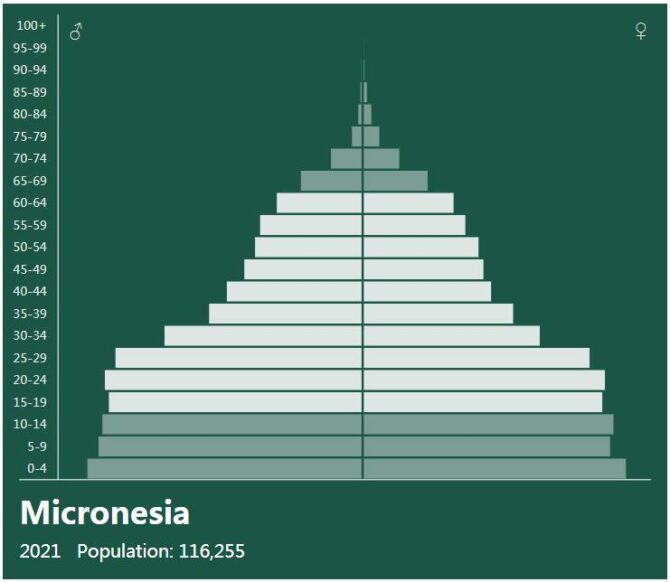