Moldova. In April, some 20,000 students in the capital Chișinău protested against the cancellation of their free public transport. During the protests, both students and policemen were injured, and about 150 students were arrested. After several days of demonstrations, Chișinău’s mayor declared that the city’s board changed its decision and reintroduced the free student trips. The protests continued for some time, with accusations against police for violence against protesters.

When the state budget for the coming years was dealt with in April, Parliament, as before, refused to approve the privatization of the wine and tobacco industries. The International Monetary Fund, the IMF, had set privatization as a condition for triggering already approved loans. The government thus lost important aid, and the budget suffered a sharp deficit. Instead, it was decided to sell the state energy and telecom companies to raise new capital.

The country’s economic situation continued to be very precarious. At least 60% of the population was estimated to live below the poverty line. The energy shortage was difficult, health care largely out of function and government employees did not receive salary for several months.

In May, a non-binding referendum was held, with the majority voting to make M. a presidential republic. But during the summer, Parliament voted instead for a constitutional amendment that gives Parliament greater power. President Petru Lucinschi vetoed the decision. that the president is elected by Parliament instead of in general elections. However, Lucinschi’s veto was voted down by Parliament, and in July the president reluctantly signed the amendment. The Constitutional Court approved a bill in July that definitively abolished the death penalty.

At the beginning of December, Parliament rallied to elect a new president following the constitutional amendment. However, no candidate got the necessary qualified majority in the first vote.

Between the Dnestr River and Moldova’s border with Ukraine lies the so-called Transnistria (or Dnestr Republic). The area proclaimed its independence from Moldova in 1990 but has never been recognized by the outside world. Ever since a brief civil war was fought in 1992, negotiations have been going on about the area’s future status, but with no results.

Transnistria (or the Dnestre Republic) lies between the Dnestr River and Moldova’s border with Ukraine. Nearly two-thirds of the population of about 505,000 are ethnic Russians and Ukrainians. Just under a third is moldaver.

There are three official languages: Russian, Moldavian and Ukrainian, but Russian is used in public life. The government opposes school education in Moldavian, written with the Latin alphabet. For this reason, the authorities closed several Moldavian-speaking schools in the summer of 2004. 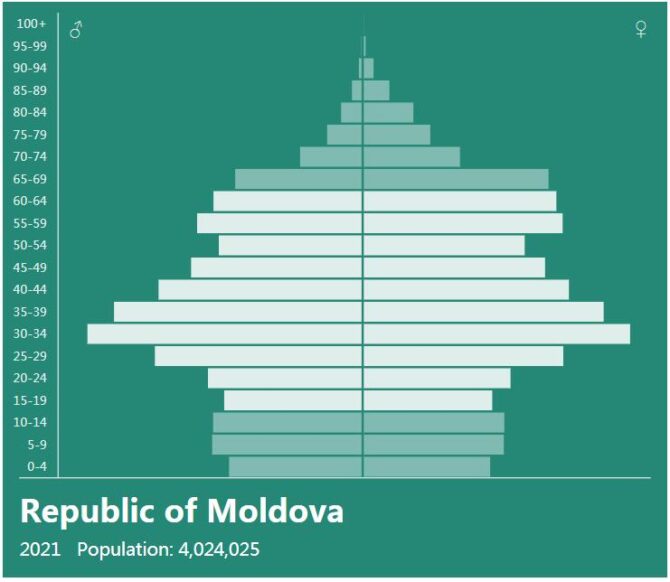 Economic conditions. – The Moldovan economy is centered on the production and export of agricultural products, with the primary sector accounting for nearly 15% of GDP and absorbing 30% of the workforce (2013); of the fertile Moldovan soil, more than 64% is destined for cultivation. In recent years, the country has also experienced a growth in the industrial sector (+ 6.8% of production in 2013), although most of the industries are concentrated in the independent region of Transnistria. GDP, after a contraction recorded in 2012 (−0.7%), resumed strong growth in 2013 (8.9%), although it remains remarkably low in comparison with the surrounding countries: GDP per capita with purchasing power parity (PPA) it is $ 4,830 (2014); the unemployment rate is very low (6% in 2014).

The economy is still largely dependent on emigrant remittances and international aid (6.5% in 2012), while the trade balance is constantly negative (−3 billion $ in 2013) due to the country’s scarce energy resources. for which it totally depends on imports from Russia. In August 2013, however, Moldova started the construction of a gas pipeline that will connect the Moldovan network to the European one, through Romania; it was a decision that led to negative reactions from Moscow, with the rise in gas prices and a consequent contraction of the good growth recorded in 2013. Despite this, the approach to the market and to European policy continued with the signing, on June 27, 2014, of the Deep and comprehensive free trade area.