Kyrgyzstan. In February and March elections were held for both chambers of Parliament. The largest was the resurrected Communist Party, the Party of Kyrgyzstan Communists, whose support increased in step with the economic difficulties. But there was confusion about the election result. OSCE observers explained that the election had not gone right, and the opposition said it had been deprived of a number of mandates due to election fraud.

Feliks Kulov, leader of the country’s second largest party, Dignity, was one of those who did not come into parliament, and he testified that voters were mutilated and threatened in his constituency. When Kulov’s supporters demonstrated, the authorities responded by arresting Kulov and accusing him of abuse of power during his tenure as Minister of Security in 1997-98. Another opposition leader, Danijar Usenov, was arrested, accused of involvement in a fight with officials at Bishkek Airport in 1996.

When US Secretary of State Madeleine Albright visited Kyrgyzstan in April, she stated with reference to Kulov that political opponents should not be made criminals. In August, Kulov was acquitted by a military court of the allegations of abuse of power, but the verdict was later rescinded. However, Kulov remained on the loose, but was prevented, along with about twenty other prospective candidates from running in the presidential election this fall.

In August, Islamic rebels entered Kyrgyzstan and Uzbekistan from Afghanistan via Tajikistan. Struggles continued in Kyrgyzstan for over a month, and authorities claimed that the rebels lost 120 dead and 200 wounded, while 34 Kyrgyz soldiers were killed.

In October, President Akajev was re-elected for a new five-year term. According to official data, he received close to 75% of the vote, while the Deputy Speaker of Parliament Socialist Party leader Omurbek Tekebajev received 14%. A further four candidates were allowed to stand. Election workers from the opposition were arrested by police or prevented from monitoring voting, and international observers reported extensive electoral fraud. The OSCE explained that the election had not been fair and free.

Kyrgyzstan’s GDP grew by 5% during the first nine months of the year, and both industrial production and exports increased significantly. However, agriculture did not go well.

An international aid organization, the European Children’s Trust, estimated that 88% of the country’s population lives in poverty.

In December, President Akajev appointed a new Prime Minister, Kurmanbek Bakiev, who was approved by Parliament.

The electoral authority announces presidential elections until January 10, 2021. Japarov announces that he will resign as president in December and then run for the regular presidency. At the same time, the police are conducting a raid on the election authority’s office in search of evidence of electoral fraud in connection with the annulled parliamentary elections on 4 October. President Japarov wants to dissolve and reform the electoral authority.

Votes in favor of abolishing the part of the constitution that requires new elections to be held after an election has been annulled; Parliament then overturned a decision by the electoral authority to hold new elections to parliament on 20 December.

Rajimbek Matraimov, former deputy head of the customs office, was arrested and detained for a few hours on charges of corruption. Matraimov is released when he promises to pay back millions of dollars. Matraimov is accused of embezzling $ 700 million in government funds. He is also accused of funding political election campaigns for people loyal to former President Jeenbekov.

Japarov will also be the new president

President Jeenbekov submits his resignation to Parliament. According to the constitution, he will be replaced by the Speaker of Parliament, Kanat Isajev, but he does not accept the role of Vice President. Prime Minister Japarov then appoints himself deputy president.

Japarov gets the president’s approval

In a third vote, Parliament re-elects Sadyr Japarov from the Fatherland as the new Prime Minister. This time, President Jeenbekov accepts the election since more than 80 of the 120 members of parliament vote for him. In a decree, Jeenbekov acknowledges Japarov’s new government. In a statement shortly afterwards, Japarov demanded that President Yeenbekov resign.

The president demands a new vote on the prime minister

President Jeenbekov does not accept Sadyr Japarov as the new prime minister. He says there are doubts that the vote in Parliament went in the right way. Jeenbekov orders parliament to hold a new vote on the post of prime minister.

In a new vote, Parliament re-elects Sadyr Japarov from the Fatherland as Prime Minister. Immediately afterwards, Japarov calls on President Yeenbekov to resign. Again, it is unclear whether the vote is correct and whether the election is legitimate. According to media reports, however, a majority of the members have elected Japarov as Prime Minister at an extra session. Japarov appoints a government to sit until general elections can be held. According to the constitution, a resigning prime minister must be replaced by the speaker of parliament.

Atambayev back in prison

Former President Atambayev is arrested by the police and put back in prison, where he has been serving an eleven-year prison sentence since 2017 for, among other things, taking hostages.

President Jeenbekov announces via the internet that he may consider resigning when a new election date has been set by a new election commission and that a change of government has been confirmed by parliament and the presidential office. Omurbek Suvanaliyev, the self-proclaimed head of security, says the country’s borders are closed, which is confirmed by the authorities. The country’s regular minister responsible for home security is said to have disappeared.

At least two different political camps are fighting for power in the vacuum that has arisen since the election results were annulled and the presidential and parliamentary buildings in Bishkek were occupied by protesters. The nationalist politician Japarov from the Fatherland insists that he has been elected a new government-maker by a parliamentary grouping of 35 members. At the same time, Tilek Toktogazijev, a 29-year-old entrepreneur from a rival party, says he has been elected a new government-former by the Coordinating Council formed by a number of opposition parties. Japarov does not recognize the legitimacy of the Council. Thus, a power struggle seems to be raging at the highest political level. Russia’s pro – Russian President Jeenbekov has apparently lost control of the situation and has not commented on who will be the new head of government. The violence on the streets of Bishkek continues with gangs fighting each other and looting shops and homes. Riots and looting are also taking place in many other parts of the country.

Prime Minister Boronov resigns as a result of the violent protests that led to the electoral authority annulling the results of the parliamentary elections. A group of 35 MPs elects Sadyr Japarov from the Fatherland as the new head of government at a special meeting in a hotel room after the protesters stormed and took control of the parliament. The election is conducted in a way that is contrary to the constitution. The protesters released Japarov a day earlier from prison, where he was serving an eleven-year prison sentence for, among other things, taking hostages. The presidential office is also controlled by the protesters. President Jeenbekov is said to remain in Bishkek, but has not appeared in public. The unrest is reported to spread from Bishkek to other parts of the country, prompting Russia to express concern about the development. Two mines are said to have been stormed by insurgents. Nearly 700 people are said to have been injured in the violence. A 19-year-old man has been killed. The protests concern suspicions of widespread vote buying by the presidential parties. More than a dozen opposition parties have formed a “coordination council” to calm the situation and “restore law and order”. However, Prime Minister Japarov does not recognize the Council.

The election result is declared invalid

The electoral authority annuls the election result that gave president-loyal parties almost all seats in parliament. Both the opposition and international election observers have accused the government of buying votes.

Riots and riots in Bishkek

Violent street protests erupt in the capital Bishkek. Around 5,000 protesters accuse the government side of electoral fraud and demand that the election result be annulled. They enter the parliament building and the presidential office. On video, parts of the presidential office appear to be on fire. Protesters release former President Atambayev from prison (see June 2020). The police respond with stun grenades, water cannons and tear gas. According to the Ministry of Health, one person was killed in the riots and nearly 600 were injured. About 120 of the injured are taken to hospital. President Jeenbekov accuses “certain political forces” of trying to seize power. He says that the election result may be annulled if it becomes necessary. International election observers from, among others, the OSCEsays that the accusations of electoral fraud (mainly vote buying) are “credible” and give cause for “serious concern”. Twelve opposition parties announce that they do not accept the election result.

When parliamentary elections are held, only four of the 16 parties pass Parliament’s 5% limit. Three of them are presidential loyalists. The newly formed Unity Party (Birimdik), led by President Jeenbekov’s brother Asylbek Jeenbekov, gets just over 24 percent of the vote, while the president – loyal Middle East Kyrgyzstan (Mekenim Kyrgyzstan) gets 24 percent. Nine percent of the vote goes to the Kyrgyz party, which is also loyal to Jeenbekov. The nationalist United Kyrgyzstan (Butun Kyrgyzstan) gets seven percent and thus becomes the only opposition party that gets a seat in parliament. The remaining twelve parties running in the election fall under the five percent barrier. Among them are leading opposition parties such as Enhet (Bir Bol), the Social Democrats, the Republic (Respublica) and Fosterlandet (Ata Meken). Representatives of Fosterlandet, The Social Democrats and Reforma (Reform) accuse the government side of electoral fraud, mainly voting, and declare the election illegitimate. Street protests against the election result erupt. Turnout is 56 percent. 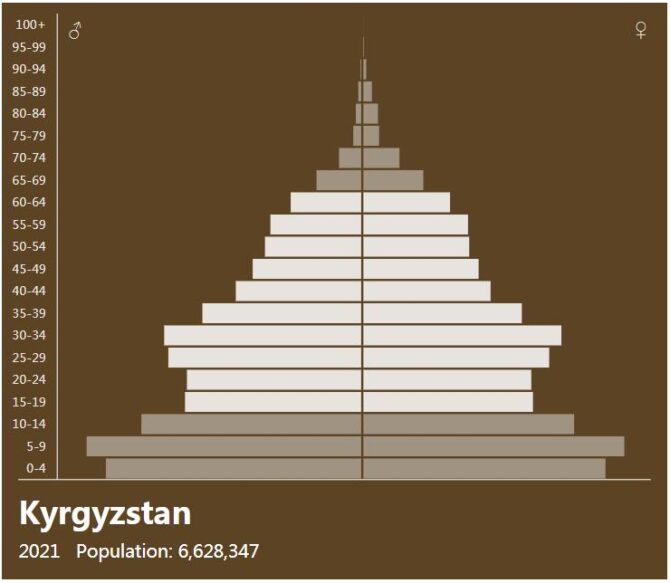