Honduras. A border treaty with Colombia, signed already in 1986 but not ratified by the two countries until December 1999, has led to conflict between Honduras and Nicaragua. The reason is that the ratification implies an implicit reinforcement of Colombia’s claim to supremacy over the San Andrés islands, to which Nicaragua also has territorial claims. Nicaragua immediately increased import duties on Honduran goods and deployed troops at the border, and at the end of February, gunfire exchanged between patrol boats from both countries in the Gulf of Fonseca, another disputed border area.

Environmental activist Félix Vásquez, who worked for the rights of farm workers, is reported to have been shot dead in front of his family. Vásquez belonged to the Lenca people, as did the previously murdered activist Berta Cáceres (see March 2016). According to the non-profit organization Global Witness, at least 14 environmental activists were murdered in Honduras in 2019, an increase from 4 the year before. It is said to be the highest figure in the world, in relation to the population. The 60-year-old Vásquez had recently announced his intention to run in the 2021 election, for the progressive party Libre.

Another hurricane pulls in

Hurricane Iota pulls in from the Caribbean, just two weeks after the previous hurricane, Eta, during what has been a record year for the number of named tropical cyclones in the Atlantic. Iota is also the first to reach category 5, the highest on the scale measuring hurricane strength. Eta, which also affected Central America, was a Category 4 hurricane. The two hurricanes have affected millions of people, mainly in Honduras, Nicaragua and Guatemala. Tens have died, hundreds of thousands have been driven from their homes, and major damage has been done to buildings, arable land and infrastructure.

Journalist Luis Almendares is shot dead by two men on a motorcycle in Comayagua, 60 km north of Tegucigalpa. Almendares was a freelance journalist who sharply criticized President Juan Orlando Hernández’s government via social media. He had several times reported death threats to the police. In June, a journalist and his chamberlain were shot dead in La Ceiba. Two gang members have been arrested on suspicion of murder. Only a few of the 85 murders of journalists committed in Honduras since 2001 have led to convictions.

Embassy relocation in Israel is planned

President Juan Orlando Hernández announces that the embassy in Israel will be moved from Tel Aviv to Jerusalem before the end of the year. Honduras will thus be the second country, after Guatemala, to follow the example set by the United States by moving its embassy in 2018. The decision also means that the country takes another step away from the neutrality in the conflict between Israelis and Palestinians that has long prevailed in foreign policy. As early as 2019, a trade office was opened in Jerusalem and Israel has had a new representation in Tegucigalpa since August this year. Honduras has the second largest Palestinian population in Latin America, after Chile. 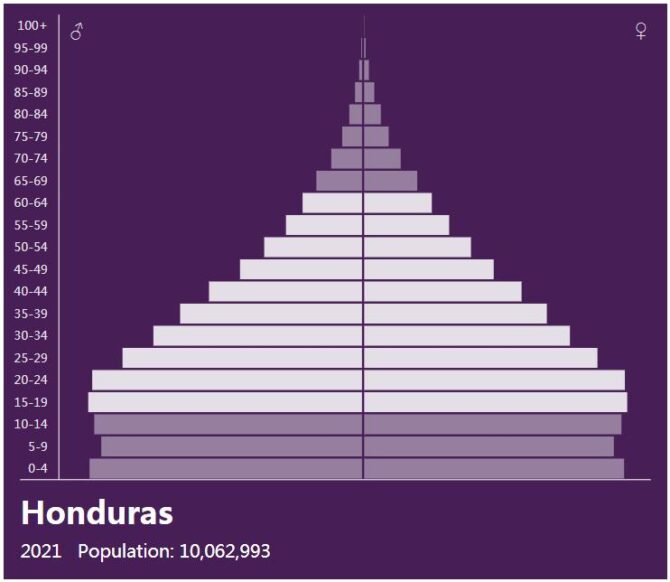 It can be calculated that at the end of the century. XVIII there were, in all the current territory of Honduras, more than 100 thousand residents; in one hundred years the population had more than fivefold (544,000 in 1901), and it has grown considerably over the last thirty years; however this remains one of the least densely populated parts of America. More than from the overall figure that marks this density, the fact is evident from the very unequal distribution of the residents in the different provinces: while those of SO. and S. mark values ​​ranging between 10 and 19 residents per sq. km., almost all the territory to the East. of the great median depression in no place exceeds 10 residents per sq. km., indeed it remains for the most part below 2. The lack of inhabited centers for very large areas and the fact that, of the largest, only two exceed 10 thousand residents and the capital itself does not even touch 50 thousand. Furthermore, only for the latter can we speak of urban development in the proper sense; all the other agglomerations have more or less the character of large villages, except perhaps the ports along the Atlantic (La Ceiba, Trujillo, Tela, Puerto Cortés), where the transformation imposed by the development of trade has been and will certainly be more rapid.