Haiti. Following international pressure and several postponements, May 21 elections were held for the congress. First, the election result, a success for the Fanmi Lavalas (FL) government party, was considered correct, and both FL and international election observers took fairly lightly on the opposition’s claims of irregularities. Gradually, however, the suspicions were reinforced that the election had not gone right. Among other things, if at some polling stations there were only officials from FL, and the second round, which would have been held on June 25, was postponed indefinitely.

The President of the Election Commission claimed to have been pressured by President René Préval and the death threat and fled the country. The congressional elections have been seen as crucial to normalizing Haiti’s institutional life, and international donors are holding back their aid as long as Haiti, which has been in political crisis since 1997, has not consolidated its political infrastructure. But the turmoil surrounding the congressional elections led to the opposition boycotting the November 26 presidential election. Former President Jean-Bertrand Aristide’s landslide victory (92%) was therefore illusory.

Since the beginning of the 2000s, Haiti has been characterized by political turmoil and major economic disparities. The great earthquake in 2010 left huge traces, both human, economic and political. However, unlike in the past, it has become the norm for presidents to be replaced by democratic elections, which has contributed to increased stability, despite major protests in the election of President Jovenel Moïse in 2016.

On January 12, 2010, Haiti was hit by the country’s most powerful earthquake in at least 200 years. After one month, the number of confirmed fatalities was set at 223,000, a number the government estimated had to be increased to over 300,000.

The disaster left around three million people homeless, and hundreds of thousands moved out of the area around the capital Port-au-Prince, where the damage was enormous. The reconstruction of the country was estimated by the Inter-American Development Bank to cost up to NOK 80 billion. 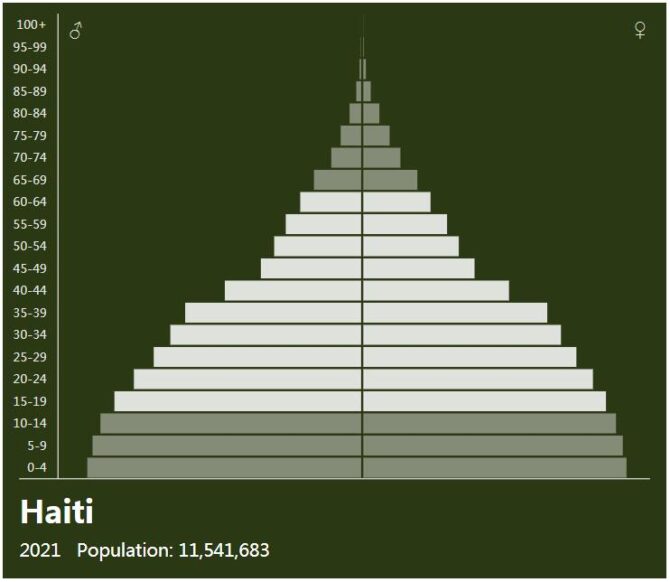 HAITI. – Since 1962 the Republic of Haiti has been divided into 9 departments, due to the establishment of four new districts (North-East, Center, South-East and Grande Anse).

In 1964, several changes were made to the Constitution, which, among other things, sanctioned the principle of bilingualism, whereby, while French remains the official language, the Creole language used by most of the population is also used in public services. population.

As many as 77% of the active population is still employed in agriculture: a largely subsistence agriculture, which contributes to the formation of the gross national product for almost 50% (more than in any other Latin American country). Coffee (350,000 q in 1973) is still the main export item; the crops of cane, agave sisalana, banana and corn are also widespread.

In the 1960s, the exploitation of deposits of bauxite and copper ores began; while the former continues to be actively extracted and exported (800,000 t in 1973), copper mining has practically ceased.

The role of manufacturing is modest, occupying just 6% of the active population and contributing 13% to the gross national product; food ones prevail (sugar factories, rum distilleries).

Foreign trade takes place mainly with the United States; The main suppliers also include Japan and Canada, with customers in Belgium and France. The trade balance is passive.

The roads extend for almost 4000 km, but less than 1000 are practicable all year round; there were 13,000 cars in 1972; the railways extend for 350 km. Port-au-Prince has the only major port and has an international airport.

Overall, Haiti reveals alarming conditions of underdevelopment, as shown by various indicators, such as low energy consumption, modest urbanization rate, low exports and the value of per capita income, which is the lowest in America. Latin and one of the lowest in the world and tends to decline further (average annual decline of 0.9% in the decade 1960-70).