The border with Senegal was closed on several occasions during the spring and summer. Reports came that armed Senegalese separatists or bandits had crossed the Senegal border to steal cattle and vehicles. Separatists from the MFDC (Mouvement des Forces Démocratiques de la Casamance), which according to the Senegalese government has bases in Guinea-Bissau, were accused in April of killing 18 people in southern Senegal. The Guinean government shortly thereafter accused Senegal of having bombed areas in northern Guinea-Bissau. This was denied by Senegal, who admitted, however, that a military operation had been carried out against the MFDC in the border area. The country’s prime ministers met in September for discussions on how to end the violence.

A political crisis arose in September when Yalla dismissed four ministers from the RGB coalition partner (Resistência da Guiné-Bissau). The government thus lost its majority in Parliament. The reason was disagreement over what policy the government would implement. However, the crisis could be averted and the ministers reinstated.

In October, a new council was appointed, with representatives of all political parties in parliament and civil organizations, to take over the role of adviser to the president, previously held by a group of military. 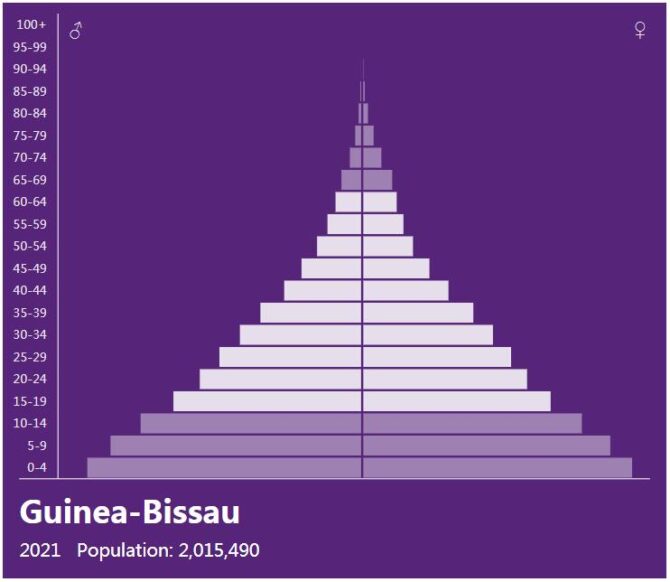 West African state. In 2005, demographic estimates attributed to the country a population of 1,586,000 residents. The capital Bissau is the only urban center of any significance. The natural increase remains quite high, despite the fact that in the first years of the new century the birth rate showed a slight decrease; on the other hand, the mortality rate remained substantially unchanged, also due to the spread of AIDS in the country (in 2001 over 10 % of the population was infected by the virus, which, in the same year, caused the death of about 1200people). Demographic and social statistics underline the persistence of a situation of very serious backwardness, and the country occupies one of the last places in the ranking relating to human development indices (173rd place in the 2006 ISU ranking). The precariousness of the social and health situation and the devastation suffered by the modest infrastructures during the 1998 civil war certainly favored the spread of the cholera epidemic that struck Guinea-Bissau during 2005, claiming numerous victims (in October, after four months of epidemic, there were no less than 300 dead and over 19,000 infected).

The economy was also heavily affected by the consequences of the civil war: in 1998 the GDP decreased by 28 %, only partially recovered in the following years. In 2000, the fall in the international prices of cashews, the main item in the country’s exports, worsened the precarious economic situation. The already low per capita income has contracted further and, in the presence of a strong inequality in the distribution of wealth (it is estimated that 10% of the population holds just under half), it is estimated that the vast majority of residents live below the subsistence level. The geological explorations for oil and phosphates conducted up to now have not given the desired results.