Eritrea. After almost a year of relative silence in the border war, more than 100,000 Ethiopian soldiers moved deep into Eritrea in May. The Eritrean army was forced to panic retreat, and up to one million civilians fled. The strategically important city of Barentu, west of the capital Asmara, was evacuated. After two weeks of fighting, Eritrea agreed to withdraw from all areas occupied since the war broke out in May 1998. Eritrea, in return, accused Ethiopia of occupying territories that “undisputably” belong to Eritrea.

Following the mediation of the African cooperation organization OAU, a cease-fire agreement was signed in Algiers on June 18. As a result of the agreement, the UN Security Council approved in September that a peacekeeping force of 4,200 be stationed along the 100-mile border during late autumn, mainly in a 24-km buffer zone on the Eritrean side, to monitor the Ethiopian retreat. However, continued peace talks went slow, and there was widespread concern that the fighting would re-flame.

Aid organizations reported in the fall that the civilians driven away by the fighting in May were living in difficult conditions among the mountains. Major material destruction in the areas occupied by the Ethiopian troops and extensive minors will make life difficult even when the refugees can return.

The loss of the war propelled some self-examination both within the Eritrean leadership and among the public, where demands for democratization and increased transparency in the state’s affairs began to be heard. Parliament decided in October that the country’s first general elections should be held in December 2001. Before that, a commission will establish rules for a new multi-party system.

Unemployment (in% of the labor force)
no information 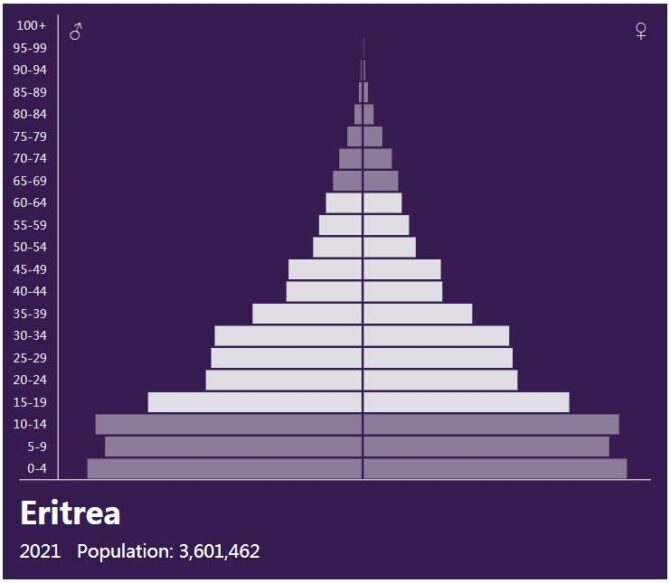 The peaceful way of resolving the conflict was encouraged by the Soviet and Cuban governments, which also contributed with their decisive military aid (also in men; still in the 1988 campaign the Front captured three Soviet officers, while another of them fell on the field) the success of some military actions of the Ethiopian government (eg in 1978). For their part, the liberation movements, in the areas of North-West Eritrea, which they controlled and held as the basis of their organization (which also benefited from the territory of neighboring Sudan), reorganized all sectors of political and social life, conforming to the principles of Marxist socialism; the rearrangement also had a strong influence on the Tigrinya language (see Ethiopia: Literature, in this Appendix).

In autumn 1989 the Ethiopian government and the FPLE started negotiations which were interrupted in February 1990 after the occupation of Massawa by the forces of the Front. In May 1991 the conquest of Asmara and Assab sanctioned the definitive victory of the independence forces. The Front, which had thus taken control of Eritrea now de facto independent, he set up a provisional government presided over by his own secretary I. Afewerki. The latter entrusted the choice between independence, federation or unity with Ethiopia to a referendum. In the meantime, good relations have been established with the new government of Addis Ababa.