Zambia. Environment Minister Ben Mwila in January accused President Frederick Chiluba of being authoritarian and undemocratic, and the ruling Multi-Party Democracy Movement (MMD) for overthrowing the country in economic ruin. Mwila hinted that he wanted to run in the 2001 presidential election, when Chiluba had to resign according to the constitution. In July, Mwila was excluded from MMD. He automatically lost his government post and parliamentary seat and formed his own party, the Republican Party, with clear ambitions to challenge the MMD. He was also subjected to harassment. a house search, which was interpreted as an attempt to scare him into not running for election. Among the opposition there were suspicions that Chiluba would try to change the constitution in order to remain.

Former President Kenneth Kaunda regained his Zambian citizenship in October, which he was deprived of in 1999 on the grounds that his parents came from what is today Malawi. His contested domicile in Zambia was used by the MMD to prevent him from participating in the 1996 election. Kaunda, who has left active politics, was succeeded in May as leader of his party UNIP by former central bank governor Francis Nkhoma.

Zambia’s industry is relatively much developed on an African scale, but it has matured, and investment and modernization are needed. Industrialization has been a major consequence of the country’s mining operations, including the metal industry in the Copperbelt. In addition, there are the most lighter consumer goods industries in the larger cities, as well as the production of mineral fertilizers and cement. A large part of former state-owned industrial enterprises were privatized from the late 1990s. For example, Norske Dyno Industrier ASA bought the majority stake in Zambia Detonators Ltd.

Zambia has had a positive trade balance with foreign countries at times, both because of high revenues from copper exports and strict import restrictions. The country relies on assistance from other countries and international organizations, and is one of the main recipients of Norwegian development assistance. The country’s exports are dominated by copper, but its relative importance has declined substantially since the early 1990s.

Major trading partners are South Africa and the United Kingdom, as well as the countries of the COMESA region.

The road and rail network is poorly developed and partly poorly maintained. The transport network is to a large extent aimed at supplying the Copper Belt with goods and exporting the copper. At the beginning of the 21st century, there were 2164 km of railway and approx. 67 000 km of road. Until 1969, much of the freight by rail went to Mozambique, Angola and DR Congo. Due to war in several neighboring countries, for a period more and more of the freight on the road to Dar-es-Salaam in Tanzania. The Tazara Railway (Tanzania-Zambia Railway) was opened in 1974 with considerable Chinese assistance. The Benguela Railway to Lobito, Angola, was closed in 1975 because of the war there; rehabilitation started in 1997. Main roads also to Malawi, with connection to Mozambique and to Botswana. Oil pipeline from Tanzania with end point in Ndola. After Zimbabwe’s independence, more of the traffic goes back to Zimbabwe – and on to South Africa – and Mozambique. Road connection between Zambia and Botswana was opened in 1984. 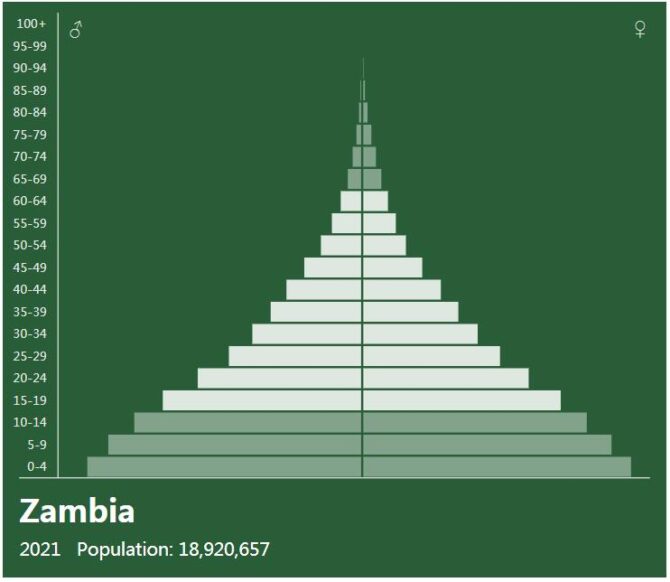