Western Sahara. Representatives of the Western Saharan organization Polisario, who are fighting for independence from Morocco, and for the Moroccan government held direct talks on May 14 in London. No concrete progress was made at the meeting, which was followed by a similar one on May 28.

In October, UN Secretary-General Kofi Annan demanded that Morocco hand over some powers to local Western Saharan bodies. He threatened that the UN would otherwise carry out a planned referendum on the future status of V without taking into account the Moroccan requirements that even immigrant Moroccans should have the right to vote. Polisario demands that only the indigenous people are allowed to vote.

The Moroccan-occupied parts of Western Sahara have changed a lot since 1975, thanks to large state investments. Nowadays, Western Sahara is a minority in their own country, as most residents are Moroccans who moved in after the invasion. Security forces are progressing much harder in Western Sahara than in actual Morocco, but protests continue to flare up irregularly.

Western Sahara has been divided since the 1980s by a mined sand embankment that runs throughout the territory from north to south. Morocco controls the three-quarters of the territory to the west of the wall, including the entire coast and all cities, but continues to claim the entire territory.

Western Sahara is considered part of southern Morocco and is managed under Moroccan law, with a governor as the highest government representative. In practice, the area is under close supervision from the security services and the military, due to the importance of the Western Sahara conflict to the country. Western Sahara has been divided into three regions, two of which also cover areas in southern Morocco. The boundary line was changed with the major regionalization reform launched by the king in 2010 (see Morocco: Modern History).

The majority of the population today consists of Moroccans who have moved in since 1975. According to 2004 Moroccan population figures, the proportion of native speakers of Hassania (the Saharan dialect of Arabic) is not higher than 40 percent in any of the provinces that include Western Sahara. In the southern half of the territory, the figure is as low as 21 percent. It is also apparent that about 15 percent of Western Sahara residents now speak some Moroccan Berber language, mainly tashelhit.

Thus, most Moroccan immigrants are non-Saharan, both Arab and Berber. They have generally been attracted to the area by generous subsidies, government jobs, business opportunities or military missions. Following the ceasefire in 1991, the government also moved tens of thousands of ethnic Saharans from southern Morocco to Western Sahara, hoping to present them as voters in a possible referendum on independence.

The Moroccan-controlled parts of Western Sahara are now open for tourism and transit, but remain under strict military and police control. The transparency of the world is limited. Several foreign journalists have been expelled from the area and Moroccan journalists reporting on Western Sahara are badly offended if they do not support the government’s line. In November 2009, Morocco expelled a Swedish diplomat, accused of violating his powers through contacts with Police Sympathizers. Swedish Foreign Ministry protested.

The initial Moroccan invasion of 1975 was very brutal. During the war years, a large number of Saharans were killed or “disappeared”, sometimes even families and relatives of suspected Polisario supporters. Hundreds of cases of such “disappearances” are still unresolved, despite the fact that the state acknowledged some cases after Mohammed VI’s 1999 power take-over. Yet it remains far more dangerous to be politically active in Western Sahara than in actual Morocco, and Western Saharan human rights groups are denied permission to work from the authorities.

There are no specifically Saharan political parties. By contrast, Moroccan political parties have local branches in Western Sahara, often linked to local potentates who support Morocco. Parliamentary and local elections are held in the area despite Polisario’s protests, and Moroccan authorities generally report a significantly higher turnout in Western Sahara than in actual Morocco.

During the 2000s, Morocco has taken the initiative to preserve the Hassani dialect and other Saharan customs, which were previously viewed with some suspicion. Among other things, a local TV station has been started in El Aaiún, which reports on Saharan culture and local issues, while also propagating for the area’s Moroccan identity.

The Moroccan-controlled parts of Western Sahara receive extensive financial support from the central government, which has greatly raised the standard of living. For example, Western Saharan students receive free travel and other benefits at Moroccan universities, as part of their efforts to integrate the people of Morocco. 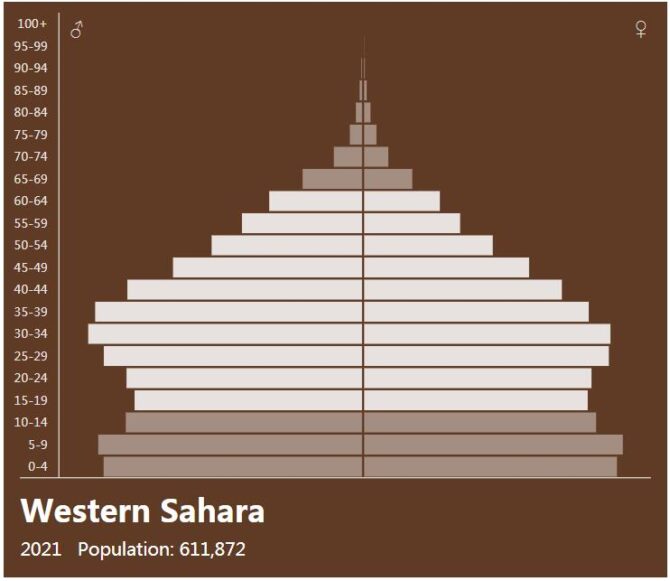