Tajikistan. In February and March elections were held for the parliament’s lower house. President Imomali Rachmonov’s party, the People’s Democratic Party, received over 70% of the vote. The opposition, however, claimed that extensive electoral fraud had occurred and that many candidates had been barred from running. Observers from the UN and OSCE also expressed doubts that the elections had been right. Several violent assaults preceded the election. In February, the Deputy Minister of Security was killed by a bomb as he traveled by car through the capital, Dusjanbe.

The National Reconciliation Commission, which has worked since the end of the civil war in 1997, was dissolved in March because the elections were the last part of the peace agreement. However, several problems were unsolved, mainly the relocation of over 100,000 refugees, integration of the opposition’s armed forces into the country’s army and the quota of opposition politicians in governing bodies.

In the spring and summer, Tajikistan held several presidential and foreign minister-level meetings with its Central Asian neighbors and decided on cooperation against Afghan-backed Islamic terrorists in the region. In August, guerrillas from Afghanistan were reported to enter Uzbekistan and Kyrgyzstan via Tajikistan. In both countries, several weeks of fighting were fought, with many deaths as a result.

Missing rains caused Tajikistan to suffer devastating drought during the summer and autumn, the worst in 70 years. At the same time, irrigation systems were largely out of use since the Civil War. According to the UN, 3 million residents, almost half of the country’s population, were affected by the drought. In November, the UN warned that 1 million people were starving for the winter. Many of them lived in hard-to-reach mountain areas, where it would take a long time to obtain food shipments. In the past, about 85% of Tajikistan’s population is estimated to live in poverty.

The front of the civil war in Afghanistan was getting closer and closer to Tajikistan in September, and upwards of 150,000 people were said to be fleeing the Tajik border. As a result, Tajikistan closed its border, which is guarded by Russian soldiers in cooperation with the Tajikistan authorities. In the autumn and winter, appeals came from, among other things. The UN Refugee Commission for Tajikistan to let in the worst affected refugees, mainly women and children, who lived in inhumane conditions in the border area. 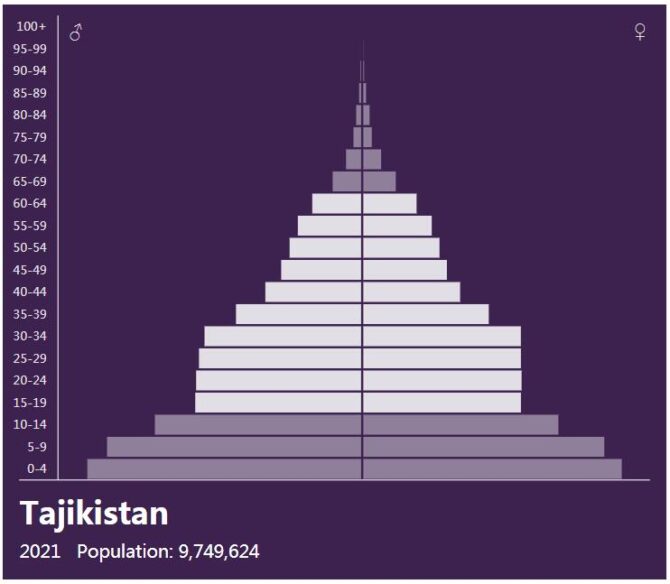 Demography and economic geography. – Internal state of Central Asia, Tajikistan extends largely over high mountains (142,550 km 2), with 8,408,947 residents (according to an estimate by UNDESA, United Nations Department of Economic and Social Affairs, of 2014) distributed very unevenly, given that the eastern part is occupied by the Pamir mountains. The capital, Dušanbe, has more than 725,000 residents, while in 1991 there were 582,400. Another important city is Hudzand, populated by Uzbeks, strongly affected by conflicts and emigration (it dropped from 164,500 residents in 1991 to 162,000), the capital of the fertile Fergana valley, which constitutes 75% of the arable land and supplies two thirds of the industrial production of the whole Tajikistan, although hosting only one third of the total population; it is almost surrounded by Uzbek territory along the path of the Syrdarya River, which flows first into Kyrgyzstan and then into Kazakhstan.

The shape of the borders of the Tajikistan is the result of a desk elaboration, carried out by Stalin in 1929. Relevant communities of Tajik ethnicity live in northern Afghānistān (6 million, equal to almost 25% of the total population); then in Russia, as well as in neighboring countries (more than a million in Uzbekistan, concentrated in Samarkand and Buhara). In the country, the Tajik ethnic group (almost 65%, with Persian language) coexists with Uzbeks (26%, concentrated in the Fergana valley), Russians (3.5%), Tatars (1.4%) and Kyrgyz (1.3%). To the south, the Tajikistan has a long border with Afghānistān, often referred to as a place for drug trafficking. The high Afghan Hindukush range separates Tajikistan from Pakistan. To the east, the Tajikistan borders on China, but there is a lack of logistical infrastructures (the main crossing, Passo Qolma, is at 4762 m). In 2011, an international treaty has allowed China to expand over about 1000 km2 of Tajik territory. The greatest tensions oppose the Tajikistan to Uzbekistan: to counter the ambitions of the gigantic neighbor, the government has joined the Shanghai Pact, that is SCO (Shanghai Cooperation Organization) together with China, Russia, Kazakhstan, Kyrgyzstan and Uzbekistan.