Sri Lanka. Hard battles continued throughout the year on the Jaffna peninsula in the north between the army and the guerrilla Tamil Eelam Liberation Tigers (Liberation Tigers of Tamil Eelam, LTTE). At the same time, strenuous attempts were made to reach a political solution to the civil war, which has killed at least 65,000 people since 1983. In June, President Chandrika Kumaratunga was supported by opposition leader Ranil Wickremesinghe for a constitutional change that would give the provinces increased political power. It was hoped that decentralization would take the lead of LTTE’s demand for an independent Tamil state. But both guerrillas and moderate Tamil parties rejected the plan as inadequate, while nationalist Sinhalese circles saw their own culture’s position threatened. Finally, Wickremesinghe also withdrew his support, and thus the government had no opportunity to get the plan approved in Parliament.

In the spring, LTTE made a strong advance towards the Jaffna Peninsula, operated the army on a retreat and stood in May just outside the central town of Jaffna, where the army garrison was completely enclosed. The government introduced martial law, including media censorship and strike bans, and ruled over large sums from development projects to the military.

Since the state recently bought weapons for $ 350 million, including from Israel, in September and October, the army went counter-offensive to drive LTTE out of the immediate vicinity of the city.

In October, 26 teenagers were murdered when a Sinhalese lynch mob attacked a rehabilitation camp for former guerrillas in southern Sri Lanka. The massacre led to unrest and Tamil revenge campaigns.

During the year, Norway tried to mediate in the war. A Norwegian envoy met the LTTE leader Velupillai Prabhakaran and said afterwards that the guerrillas were genuinely interested in peace. President Kumaratunga, who previously said that guerrillas would be crushed militarily, signaled new interest in negotiations. However, the Norwegian Peace Initiative teased Sinhalese nationalists, who repeatedly demonstrated at the Norwegian embassy and demanded an end to the “intervention”.

Parliamentary elections were held in October following a bloody election campaign. The ruling Folk Alliance won, but was forced to enter into a coalition with a Tamil and a Muslim party to gain a majority. Opposition politician Anura Bandaranaike, President Kumaratunga’s brother but political opponent, was elected President of Parliament.

In August, 84-year-old Prime Minister Sirimavo Bandaranaike, the president’s mother, resigned for health reasons. She passed away on election day on her way home after voting.

Gross national product (GNP, per resident and year): 3840 US$

State and form of government
Constitution of 1978
Presidential republic (in the Commonwealth)
Parliament: National Assembly with 225 members, election every 5 years
Direct election of the head of state every 5 years (one-time re-election)
Suffrage from 18 years of age 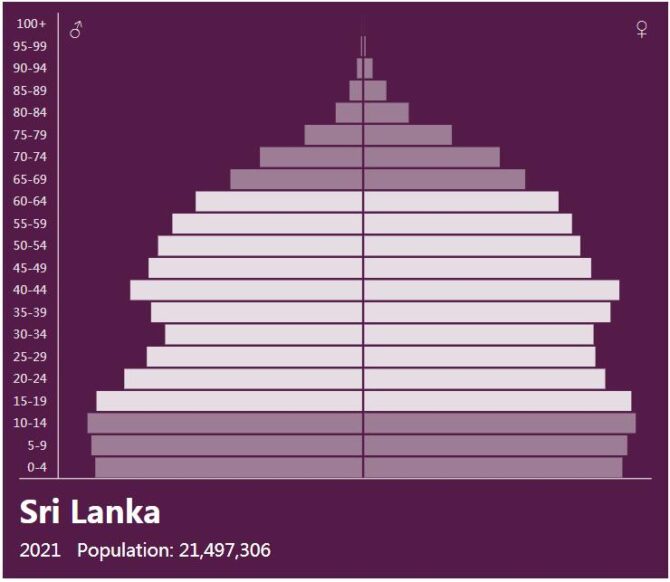