As one of the first colonies of the Portuguese empire, the islands of São Tomé, Príncipe and the neighboring small islands have a terrifying history that still deeply touches many Africans when they remember the slave trade that stretched right up to the mid-19th century.

The islands are strategically located 300 km from the coast of Africa. Their natural ports were transformed by the Portuguese in the 15th century into “supply stations for the slave ships”. Dutch, Spanish, French, British and Portuguese ships bought slaves from the continent to transport them to the colonies of the American continent. Some slaves stayed on the islands where they were involved in the first African sugar cane production.

It soon came to slave rebellion in the islands. The first was stated by Yoan Gato, but failed. Later, the slave Amador carried out a rebellion that managed to bring two-thirds of the island under control, and allowed him to proclaim himself king.

The rebels were soon defeated and sought to burn down the plantations in secret rebel villages in the rainforest. The plantation owners who continued to Brazil with their slaves thus brought the seeds of the rebellion, and the slave rebellions quickly developed on the American continent, with some like it in the Palmares slave kingdom resisting the colonial power for more than a century.

In São Tomé & Príncipe, agriculture disappeared for the next 3 centuries. The islands again became a mere trading station for slaves on their way to America. It was not until the 19th century that this situation changed with the introduction of coffee and cocoa. Slavery was formally abolished in 1869, but even thereafter it continued under adorned forms – “free men” were hired for a 9-year period for a fixed salary. The social situation triggered new slave revolts, and in the early 20th century, an international boycott of «cocoa slavery» in the Portuguese colony began.

Under new forms, “neo-slavery” continued until the mid-20th century. The São Tomé & Príncipe Emigration Society organized the modern variant by “contracting” workers from the other Portuguese colonies: Angola, Cape Verde, Guinea and Mozambique. This immigration “re-Africanized” the country when mixed with the “filhos da terra” – the masters of centuries-mixed Africans and Portuguese. Under Antonio Oliveira Salazar and Marcelo Caetano’s colonial fascism, the repression was fierce, and in February 1953, more than 1,000 people were executed in less than a week in Batepa.

The massacre made it clear to the population that it needed to organize, and in 1969 the Movement for the Liberation of São Tomé & Príncipe (MLSTP), whose two primary goals were independence and land reform, was formed. 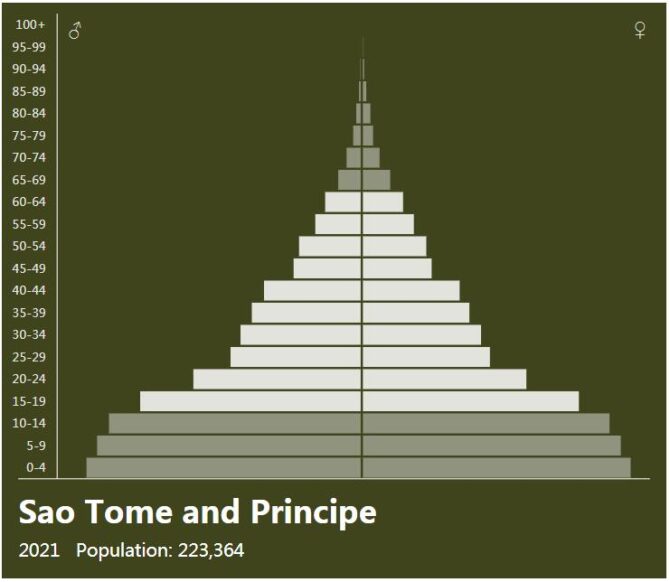