Burma. The long-standing wars between the Burmese army and ethnic minorities gained renewed attention as ten rebels from the Karen people occupied a hospital in Thailand for a day in January. 700 people were held hostage, while the rebels appealed to the outside world to intervene against the Burmese army warfare. All the rebels were killed when Thai soldiers stormed the hospital.

Reports of army massacres on minority people continued to flow. Save the Children stated that the army has forced at least 50,000 children into the war against minority groups. The UN agency ILO (International Labor Organization) reported that about 800,000 Burmese are being held in forced labor in both civilian and military infrastructure projects. The Burmese authorities rejected both charges, claiming it was voluntary, patriotic work. To the extent that there were children in the army, it was because they were lying about their age, the military said.

The confrontation between the military regime and the opposition continued. Opposition leader Aung San Suu Kyi and 14 of her party mates in the National League for Democracy (NLD) sat locked in their cars in August for nine days on the outskirts of the capital, Rangoon, since the military prevented them from attending a party meeting. After forcing them back to the city, the junta let raids in the party headquarters, seized documents and turned off the telephone lines. For almost two weeks, the NLD leaders were held under house arrest. Then freedom was short. Just days after Aung San Suu Kyi regained her freedom of movement, she was prevented from boarding a train to Mandalay and was again placed under house arrest.

In August, Rolls-Royce and Lloyd’s, as well as 37 other multinational groups, launched an international campaign against the “black list” of groups that help fund the military government of Myanmar. The list contains 95 groups that directly or indirectly maintain the dictatorship in Myanmar.

In October, Khin Nyunt resigned from the Prime Minister’s post for health reasons. He was followed by Soe Win.

December 26, a tsunami hit Southeast Asia. In Myanmar, the tidal wave cost approx. 50 people killed and a dozen disappeared. Most deaths occurred in villages in the Irriwaddy River delta southwest of Rangoon. Humanitarian organizations feared the figure was far greater, as the government has never previously published accurate information from natural disasters.

In March 2005, the ILO estimated that there were around 800,000 forced laborers in the country and therefore called for international sanctions. The ILO called on governments, employers, workers and international organizations to review their relations with Myanmar and to take the necessary steps to sanction the regime for its labor rights violations. The month before, the military junta chief, General Than Shwe, had refused to meet with a senior ILO delegation to visit Rangoon.

International representatives urged the junta to curb the military’s use of forced labor, to conduct a public campaign against this practice and to commit itself to abolishing this practice. Responding to the demands of the ILO, the Myanmar government declared that the country had met the requirements to the extent possible, and once again regretted that the ILO had been used as a tool by powerful and influential forces to exert pressure on Myanmar. The junta had already in 2000 passed a law prohibiting forced labor, and had made an agreement with the ILO on the formulation of labor law reforms. But violations of the international labor conventions have continued, and the main use of forced labor remains the 400,000-man army that dominates most of the country’s sectors.

In July 2005, ASEAN decided not to leave the chair of the Association to Myanmar in 2006.

In April 2007, General Thein Sein was inaugurated as interim prime minister, while Soe Win was in medical treatment. When Win died in October 2007, the appointment became permanent.

In May 2007, the military dictatorship extended Aung San Suu Kyi’s house arrest by another year. In Myanmar, house arrest decisions need to be reviewed every 12 months, so the extension was expected. Yet the extension led to criticism from political leaders around the world and from the UN.

The regime announced in February 2008 that a referendum would be held on a new constitution in May 2008 and elections in 2010. The referendum was conducted in 2 rounds in May and approved with 93% the transition to democracy.

Myanmar was hit on May 2, 2008 by Hurricane Nargis, which caused widespread devastation in the Irriwaddy Delta. Between 75,000 and hundreds of thousands were killed. Indian meteorologists warned Myanmar’s authorities on May 1 of the hurricane’s arrival, but either the warning was ignored or the authorities failed to initiate evacuation of the most vulnerable. The country subsequently asked for international disaster relief, but problems immediately emerged as the regime itself wanted to distribute the relief, while the international organizations wanted to provide the distribution. Danish Minister of War Anders Fogh Rasmussen threatened to invade Myanmar to distribute relief. Opinions the international community shook their heads. Myanmar allowed ASEAN countries to participate in the distribution of relief aid to the victims of the hurricane in mid-May.

Aung San Suu Kyi’s house arrest was due in May, but was extended by the regime in August for another 18 months. 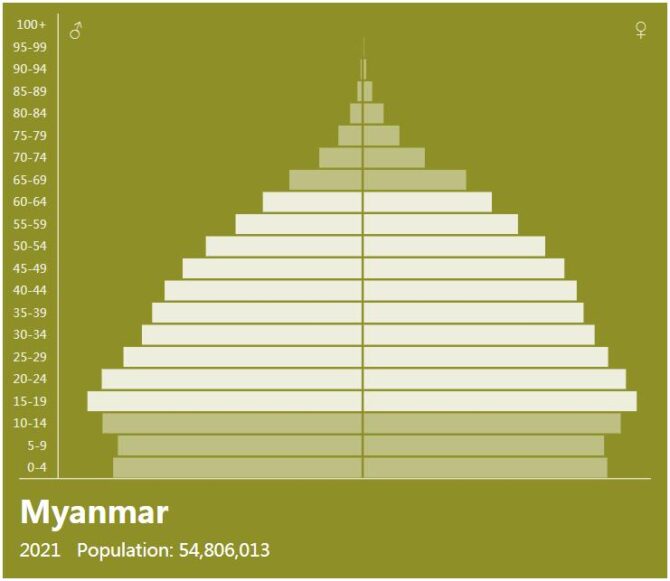