Central African Republic. The situation in the Central African Republic was judged to be so stable that the UN peacekeeping force MINURCA could be disbanded in February, almost two years after it was sent to the country. The mission of the UN troops was to uphold the peace treaty concluded through international mediation following repeated army revolts in 1996 and 1997.

In December 2012, the armed groups in the northern part of the country joined together to form the armed coalition Séléka, whose purpose was to overthrow the government. At the end of the month, it controlled large parts of the country but could not take Bangui, which remained under MICOPAX’s control. The government was now further requesting soldiers from South America who joined MICOPAX in the capital. In peace talks between Séléka and the government in January 2013, the president agreed to appoint a prime minister from the opposition and incorporate partisans into the government. In early February, Nicolas Tiangaye took up the post of Prime Minister. The partisan leader, Michel Djotodia became the first Deputy Prime Minister and Minister of Defense. In March, the peace process collapsed as partisans claimed President Bozizé had broken his promises. The partisan army approached the capital, which was captured on March 24. President Bozizé had to flee and Michel Djotodia took over the presidential post. He left the prime minister on his post and declared that the country had entered a 3 year transition period. The military dictator then put the constitution out of order, dissolved the government and parliament. Djotodia met on March 28 with top police and military officers who recognized the new president. On April 3, the African Union held a summit in Chad, declaring that the rest of Africa would not recognize Djotodia as president. Instead, the Union recommended that a transitional council be formed and elections be held within 18 months. The dictator followed the Union’s recommendation, set up a 105-person transitional council, and on April 13 was elected president of the council. There were no counter-candidates. After a few days, the Union recognized the election but insisted not on designating the dictator as president but as President of the Transitional Council. At the same time, he was instructed not to run for the next presidential election.

Djotodia was formally inaugurated as president in August, declaring that he will not run for president. The following month, President Séléka disbanded, but the partisan groups refused to disarm, and the security situation ran wild. In mid-September fierce fighting was reported between unidentified armed groups around the cities of Bossembele and Bossangoa. The battles sent 400,000 on the run. Most went into the bush while 68,000 fled to neighboring countries. The northern part of the country was characterized by murder, looting and torture. Over the next 2 months, the fighting increasingly assumed the nature of inter-ethnic and inter-religious purges. The Séléka groups in the north had predominantly nomadic backgrounds and were Muslims (15% of the population). Faced with them were the settled Christians and animists, who formed so-called “anti-balaka” militias. Both groups violated the opposite party’s civilian population.

At the beginning of December, the United Nations Security Council passed a resolution opening up more troops from the African Union and from France. It was not a “peacekeeping mission” but a disarmament to the warring groups. In mid-December, French troops were fighting with Christian militias in Bangui trying to take control of the city to run the Muslim president on the run. 500-1000 civilians were killed a week. 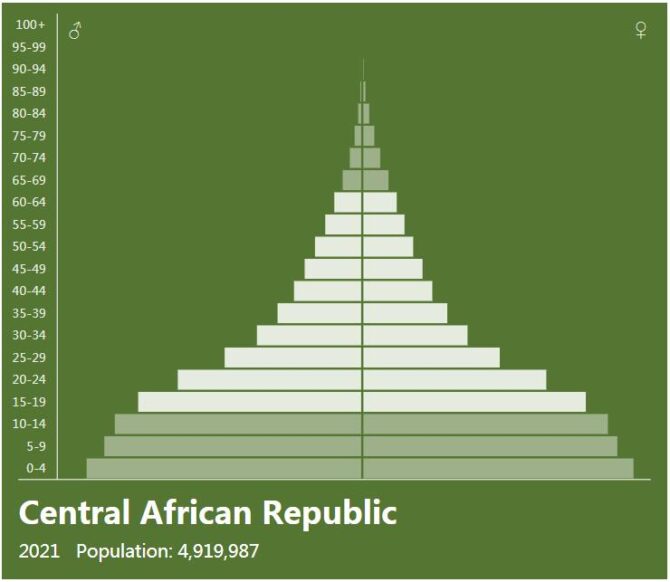 The population consists of Bantu and Sudanese blacks. The official language is French, but Sangho is a national language; moreover, the presence of a large number of ethnic groups (Banda, Baya, Mandija, Sara etc.) determines a consequent strong variety of dialectal languages. Alongside the primitive religions, Islam, Catholicism and Protestantism have partially spread. The prevailing form of settlement is rural, in villages (over 6000) of farmers and fishermen. Urbanism, apart from the capital Bangui, is underdeveloped and even the few agglomerations that exceed 30,000 residents (Bambari, Bouar, Berbérati, Bossangoa, Bria) have not taken on the functional characteristics of the city. The largest demographic concentrations are located in the western part of the country, while the eastern regions are, in fact, depopulated. The birth rate exceeds 1.5% per year, but the mortality rate is high and life expectancy at birth remains very low (around 44 years). In the adult age groups, illiteracy is around 49% of the total population.