Burundi. New peace talks between Hutus and Tutsis began in February under the new mediator, South Africa’s former president Nelson Mandela. He criticized the government for allowing the Tutsid-dominated army to block 800,000 Hutus in supervised camps. President Pierre Buyoya, who is Tutsi, promised in June to have all forced-duty Hutus return to their homes.

On August 28, the government and 13 political parties signed a peace agreement, which most observers saw as little more than a principle agreement on ethnic balance in all community institutions, including the army. Mandela had put the parties under pressure by giving them a deadline to that day. This propelled a fragile agreement, which did not include a cease-fire date nor set out how the country would be ruled until 2003, when full democracy must have been implemented. Since the two dominant hutumilisations were outside the negotiations, four Tutsi parties initially refused to sign the agreement, but they gave in after new negotiations in September.

Hard battles with hundreds of dead were fought throughout the year between the army and the hutum militaries, both while negotiations were in progress and after the peace treaty had been signed. The government appealed to neighboring countries, where the militias have bases, to force them into negotiation.

Prison for crimes with links to the regime

A court in the southern Burundi city of Makamba has sentenced three police officers, two local government officials, a representative of the ruling CNDD-FDD and seven members of the CNDD-FDD’s infamous youth militia, Imbonerakure, to have blackmailed Burundian migrant workers returning from Tanzania.. Seven of the convicts receive ten years in prison each, the other six are sentenced to five years in prison. Human rights groups welcome the ruling, adding that crimes linked to the government and the CNDD-FDD often take place with impunity in Burundi.

Stone-throwing becomes “conspiracy against the head of state”

Three young people, two men and a woman, are sentenced to 30 years in prison each for “attacking” President Ndayishimiye’s column of stones. According to the prosecutor, three stones were thrown from a petrol station at the column, consisting of about 50 vehicles, as it passed the town of Kayanza in northern Burundi. One stone hit a bodyguard, another stone hit a car while the third stone missed the column. The cars did not stop at the incident. The crime is classified as a conspiracy against the head of state. The perpetrators worked at the gas station. 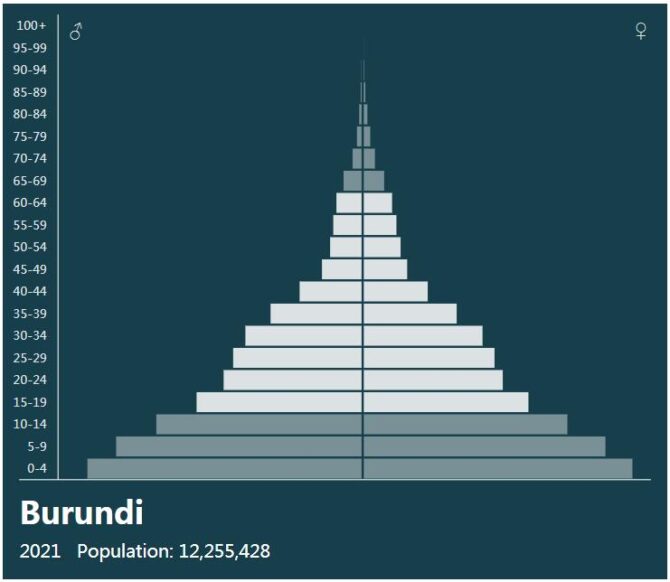