Belarus. In January, a trial was opened against former Prime Minister Michail Chyhir, who was charged with abuse of power. He had, among other things, participated in the alternative presidential elections organized by the opposition in 1999. Chyhir had left his post in 1996 in protest of President Aljaksandr Lukashenka giving himself almost dictatorial powers.

Chyhir’s successor as Prime Minister, Siarhej Linh, was dismissed by Lukashenka in February. The president claimed that Linh asked to resign, but a spokesman for Linh said the dismissal came as a surprise. To Linh’s successor, President Uladzimir Jarmoshin, the mayor of the capital Minsk, hitherto appointed.

In March, Andrej Klimaw, Lukashenka’s leading opponent, was sentenced to six years in prison for “fraud”. The charges were considered politically motivated. In March, the opposition held a demonstration in Minsk in protest against Lukashenka’s regime. About 20,000 people participated and over 270 people were arrested by police. Lukashenka, who was abroad at the time, later called the police action a mistake and dismissed Interior Minister Michail Udovikow.

In May, Michail Chyhir was sentenced to three years imprisonment and fines corresponding to more than SEK 2 million. He was also banned from holding public office for five years. Chyhir was alleged to have abused his power in 1995 by excluding a private company from the import duty requirement. Chyhir said the charges were politically motivated. In June, two other opposition leaders were sentenced to conditional prison sentences for having participated in organizing a demonstration against the regime in 1999. However, an appellate court set aside the verdict and returned the case to the first instance.

Several opponents of Lukashenka “disappeared” during the year. One of them was a Russian TV photographer, who had previously worked for Lukashenka but then made critical review reports. At the same time, the search for former Interior Minister Yuriy Zacharenko, who has been missing since 1999.

Most opposition parties boycotted the parliamentary elections in October. Many candidates were prevented from participating, and the opposition expected the election itself to be settled in advance. According to the State Electoral Commission, turnout was over 60%, but the opposition said it did not reach up to 45% and would thus be annulled. In the cities, turnout was low, but the opposition boycott had not been heard in the countryside, where Lukashenka has its strong support.

The governments of the United Kingdom and Canada award the newly established Media Freedom Award to the Independent Belarusian Federation of Journalists. The organization, which has 1,300 members, received the 2004 European Parliament Sakharov Prize.

Requirement for extradition of protest coordinators

The Foreign Ministry calls in Poland’s envoy to Minsk and demands the release of two people who supported the Belarusian opposition from Polish soil. It’s about Stepan Putilo, founder of Nexta Live, a channel on the messaging service Telegram, and its former editor-in-chief Roman Protasevich. In Belarus, a criminal investigation is underway against the two who are accused of inciting mass protests against how the presidential election in August took place.

Again, more than 1,000 protesters were arrested, according to the organization Viasna, in connection with regime critics spending Sunday protesting against the questioned presidential election. (The Interior Ministry later confirmed more than 700 detainees.) This time, the bitterness is also directed at the death of an opposition activist. Roman Bondarenko, 31, died on November 12, the day after being arrested by masked men in the process of taking down markers set up in Minsk by the opposition. Critics of the regime believe he was beaten by security forces. The government denies the allegations. Bondarenko is believed to be the fourth death among opposition activists since the protest wave began.

Two British diplomats have been declared persona non grata (undesirable) in Belarus and have left the country, a spokesman for the Belarusian Foreign Ministry said on television. The diplomats are reported to have irritated the authorities by gathering information and protests and meeting representatives of regime-critical organizations. The British government responds by forcing two Belarusian diplomats to leave London and the country.

More than a thousand critics of the regime were arrested

In connection with demonstrations three months after the criticized presidential election, 1,048 people were arrested, the organization Viasna states. The number of arrests is the highest in a day since the regime’s crackdown on the opposition began.

There have been “massive and systematic” violations of human rights, and torture, in Belarus. The assessment is made in a report by the Organization for Security and Co-operation in Europe (OSCE), which calls on Belarus to hold a new presidential election that meets international standards. No election observers from the organization were present at the August election due to Belarusian unwillingness to cooperate with the observers. When the report was completed, there was information that a total of approximately 13,000 people had been arrested before or after the election.

The EU is launching the necessary procedures to impose sanctions on President Lukashenko personally (see 2 October). The president, a son of his and 13 other people will not be granted visas to EU countries and they will have any assets in EU countries frozen. The EU holds the president and his staff responsible for arbitrary arrests and crackdowns on critics of the regime since protests began on 9 August. The sanctions are also justified by the fact that Lukashenko’s political opponents were prevented from running in the election.

Tens of thousands of protesters marched from central Minsk to a Soviet-era execution site. For almost three months, protests against the controversial presidential election have taken place every Sunday, but President Lukashenko has not been able to resign. The police use stun grenades and rubber bullets to disperse the protesters. In Minsk and its surroundings, about 300 people were arrested, according to the Interior Ministry. For a week now, the country’s borders with neighboring EU countries and Ukraine have been closed, with reference to the corona pandemic. Land borders are now also closed to non-Belarusian immigrants. 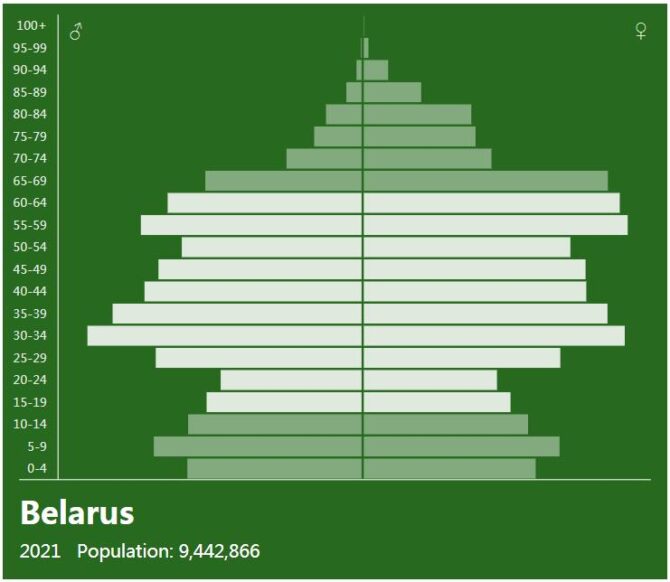