Slovakia. Prime Minister Mikuláš Dzurinda had great difficulties in keeping the ruling five-party Alliance Slovak Democratic Coalition (SDK) united and in agreement. When he failed in his efforts to form a single party of the SDK, he announced in February that he had decided to form a new party, the Slovak Democratic and Christian Union (SDKU). The new party was formally formed at the end of the year, and Dzurinda was then elected leader. SDKU was intended to be a tool for a government victory in 2002 and to complete the country’s integration into the EU and NATO. Slovakia began negotiations with the EU on membership during the year, and faced radical reforms including business and justice.

President Rudolf Schuster underwent an operation during the summer, which caused life-threatening complications: In a coma, Schuster flew to Innsbruck, Austria for care. Since the Constitution did not provide for measures with the head of state in a coma, the prime minister became acting president, which annoyed Schuster when he recovered. A subsequent report found major shortcomings in Slovak healthcare, and the Minister of Health resigned.

Mečiar had support, especially among the rural poor and the elderly, and he managed to gather enough signatures to create a referendum demanding early elections. The vote was held in November, but as only 20% of voters participated, the result was invalid.

Unemployment figures in Slovakia were among the highest in Europe and were around 20% during the year. Many jobs disappeared when a large shipyard in Komárno was forced to strike again. The shipyard could not deliver to its overseas customers because bombed bridges in Serbia continued to block the Danube River. 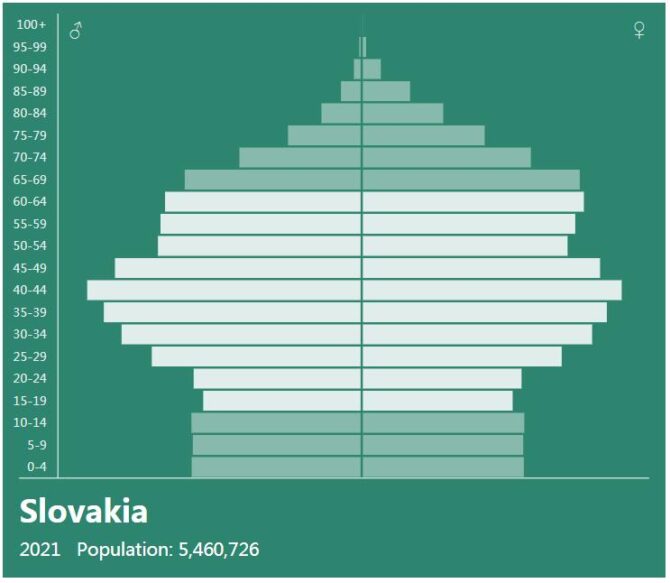 Independent state, with the name of Slovak Republic, established on 1 January 1993 and, together with the Czech Republic, born from the split of Czechoslovakia. The surface of the new state is 49,036 km 2 and its population, at the census of March 3, 1991, amounted to 5,274,335 residents. The capital is Bratislava which, on the same date, had 441,453 residents. The new state is divided into three provinces (Western, Central, Eastern Slovakia), to which is added the metropolitan province of the capital. The average population density is just over 100 residents / km 2and there are no substantial differences between the average density of the three administrative units. Apart from the capital, Košice alone exceeds 100,000 residents. 86% of the population is of Slovak nationality; there is a consistent Hungarian minority (almost 11%) as well as negligible groups of Czechs, Ukrainians and Germans.

Within the former federal republic of Czechoslovakia, the production potential held by Slovakia was significantly lower than that of Bohemia and Moravia, the living conditions of the Slovaks were lower, the inflation rate and the unemployment rate were higher. After independence, the economic trend of the Slovakia has denounced a deterioration: industrial production has dropped and GNP has undergone a further decrease. In part this deterioration represents a consequence of the split, with the fall in trade both with the Czech Republic and with the countries of the former Soviet Union, in part it reflects the situation of an obsolete production system, excessively burdened with manpower and with obvious problems of restructuring.

The industrial structure is undersized, nevertheless agriculture occupies less than 15% of the workforce and contributes less than 10% to the formation of the GDP. The arable area covers just over half of the country’s surface while the woods extend over another 40%. The primary sector is burdened by numerous problems, some of which are connected with the agricultural policy practiced by the communist regime. Productivity is modest, international markets are difficult to reach, the previously practiced self-sufficiency policy did little to help the dynamism of the sector, while the collectivized structure has to be dismantled. To aggravate the situation in which the sector finds itself, since 1990 agricultural production has undergone significant decreases. The substantial recovery of the sector is not simple and is linked to the disbursement of important investments to be allocated to infrastructural works and agricultural equipment; However, the recovery of efficiency is not an easily achievable objective as it poses problems of an employment nature: the Slovak government believes that, at least the latter, can find a solution in the context of a revival of the entire economy. The most important products include wheat (2.2 million t in 1991), barley (1 million t), corn (700,000 t), potatoes (700,000 t), sugar beets (1, 5 million t). As for livestock farming, the country has 1.4 million cattle, 2.5 million pigs and just over half a million sheep. The production of timber is huge: in 1991 it was close to 4,3.

The industry is still underdeveloped. It employs just over 30% of the workforce but contributes 50% to GNP. Metalworking activities have a certain prevalence and the plants are mostly large: companies with more than 500 employees host just under two thirds of total industrial employment. The technology used is now obsolete and mainly oriented towards products that have reached the maturity stage of their life cycle. Refrigerators, televisions, motorcycles, as well as armaments, electrical equipment and special steels are some of the most important productions. The positive effects of independence include the location in Bratislava of representative offices of important European and North American multinational companies; the government of Slovakia high-tech. Also in the secondary sector, projects have been launched for the privatization of the main state companies.

As for international trade, until 1991 the USSR was the largest trading partner of the republic of Czechoslovakia; with the dissolution of the USSR, flows with European countries, above all Germany, are expanding.