Poland. The coalition government between the liberal Freedom Union UW and the Solidarity-led right alliance AWS had a hard time keeping together. AWS accommodated over 30 small parties and groupings, and about 20 AWS MPs revolted in the spring against the government’s market reforms and budgetary tightening. They also tried to slow down EU alignment. See handbagpicks.com for Poland tour plan.

Tensions led to a government crisis in May, when Finance Minister and Liberal leader Leszek Balcerowicz decided to step down. Triggering was a conflict with Prime Minister Jerzy Buzek, AWS, around the local government in Warsaw. But basically, the architect of reform Balcerowicz was frustrated that the government did not get through its policies. Balcerowicz said Buzek was not strong enough to control the AWS MPs.

The ministers of the Freedom Union left the coalition, and in June AWS formed a minority government led by Buzek.

The government’s difficulties increased the support of the communist opposition, the Democratic Left Alliance, SLD. In the October presidential election, therefore, popular sitting president, Aleksander Kwasniewski of SLD, with close to 54% of the vote, won enough to make a second round of redundancy unnecessary. Andrzej Olechowski, an independent liberal candidate, came in second with just over 17%, while AWS candidate and Solidarity leader Marian Krzaklewski received just under 16%.

Other candidates in the election were former Solidarity leader and President Lech Wałęsa. He had lost his former popular popularity and received only about 1% of the vote. Wałęsa therefore announced that he was leaving politics for good.

The economy continued to grow and was expected to be around 5% during the year. Industry production increased, as did exports, but the trade deficit was still significant. Around three quarters of exports went to EU countries.

Negotiations with the EU on Polish membership proved to be slow. Agricultural policy, which was formally raised in the summer, was also expected to be the most difficult area for negotiation. The government has demanded that Polish farmers receive EU subsidies immediately after Poland’s entry into the Union, which the EU rejected. On the EU side, however, Poland was said to have made good progress in its EU adjustment since the previous year.

The strained relations between Poland and the Russian Federation deteriorated further at the beginning of the year, when the Warsaw government expelled nine Russian diplomats accused of espionage. Moscow responded by sending home as many Polish diplomats. However, the relationship seemed to improve during the year, and analysts believed that the Russian Federation had begun to accept that its former ally Poland had joined NATO (1999).

At the end of the year, the nurses’ union went on strike at more than 100 hospitals with demands for an increase in salaries, which amounted to approximately SEK 1,200. in month. Strikers occupied for several weeks the Ministry of Health in Warsaw and blocked, among other things. roads and railways.

The 2005 parliamentary election became a victory for the National Conservative Party for Law and Justice (PiS). This party received 27 percent of the vote and the Liberal Citizen Platform (PO) 24.1 percent. The negotiations for a coalition government between PiS and PO did not proceed, partly because of disagreement over which party should hold the presidential position in Sejm. The result was that PiS formed government together with two smaller, populist parties: the Federation of Polish Families (LPR) and the Self-Defense Party (SRP – Samoobrona).

The Prime Minister’s candidate for PiS, Jaroslaw Aleksander Kaczyński, withdrew ahead of the coalition negotiations. The reason was that his twin brother Lech Kaczyński was elected Poland’s new president in October. Instead, Kazimierz Marcinkiewicz became new prime minister in November 2005.

In the October 2005 presidential election, conservative nationalist Lech Kaczyński got 54 percent of the vote in the second round, with the counterpart being Donald Franciszek Tusk of the Citizens’ Platform (PO). Tusk was the strongest candidate in the first round, but Kaczyński received support from extremist populist Andrzej Lepper of the Self-Defense Party who achieved a staggering 15 percent of the vote. Kaczyński won on a political platform with increased state control over the economy and increased social benefits, combined with a conservative moral policy emphasizing Catholic values ​​and the fight against free abortion.

Jarosław Kaczyński took over as prime minister in July 2006, but in September 2007 the parliament was dissolved. Following the recent election on October 21, 2007, the Citizens’ Platform (PO) formed a majority government together with the Polish People’s Party (PSL) with Donald Franciszek Tusk as prime minister. A new parliamentary election was held on October 9, 2011. With 235 representatives, the Citizen Platform and the Polish People’s Party retained the majority in Sejm. These two parties formed a new coalition government on November 18, 2011. Donald Tusk continued as prime minister and was thus the first Polish prime minister to be re-elected after serving a full term.

In the fall of 2014, Donald Tusk took over as President of the European Council, and Ewa Bożena Kopasz was appointed new Prime Minister. In doing so, she became the second woman in Poland to be appointed head of government.

At the parliamentary elections on October 25, 2015, PiS received 37.58 percent of the vote and 235 of 460 representatives in Sejm. For the first time after 1990, a Left Party / Left Alliance was not represented in Sejm. Following this election, PiS formed a majority government with Beata Szydło as prime minister, while Jarosław Kaczyński continued as party leader. Beata Szydło was inaugurated on November 16, 2015. Party colleague Mateusz Morawiecki took over as prime minister on December 11, 2017.

The government’s national conservative policy has had an impact on the mass media in Poland, the Constitutional Court’s position in Poland’s political system and Poland’s relationship with the EU (see article Poland’s foreign policy). The opposition parties have strongly criticized the government’s efforts to undermine the rule of law in Poland and to make the state television and radio channels propaganda devices for the government.

During the parliamentary elections on October 13, 2019, PiS received a higher percentage turnout than in the 2015 election, but the same number of representatives in Sejm (235). Following this election, PiS established a new majority government with Mateusz Morawiecki as still prime minister. 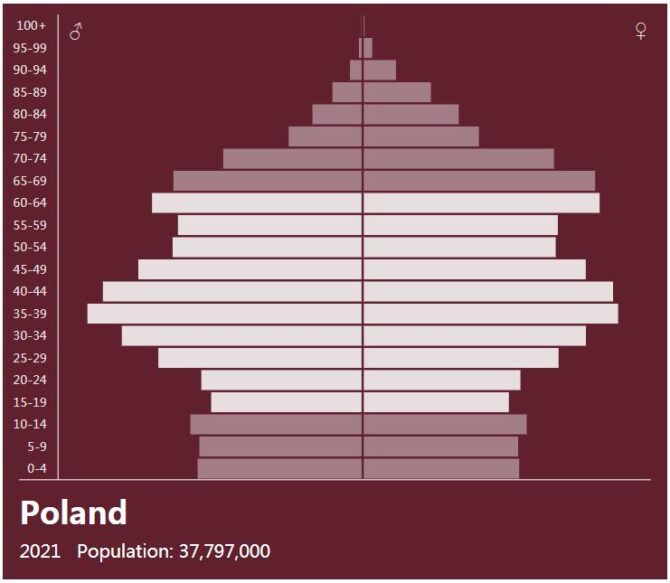