Lithuania. In February, Lithuania began negotiations with the EU on future membership. This was made possible by the fact that the government had bowed last autumn to the EU’s demand for the closure of the outdated nuclear power plant in Ignalina. However, this was met with strong opposition in Parliament when the issue was dealt with there in March and April. Ignalina’s two reactors account for 80% of Lithuania’s electricity supply, and the opposition said that decommissioning would be too costly for the country. However, the Conservative government under Andrius Kubili’s leadership succeeded in piloting the decision to close one reactor in 2005. A decision on the second reactor will be made within four years. The costs of the settlement are estimated to be equivalent to SEK 50 billion. The EU has promised to help with the financing. The Swedish Prime Minister visited Lithuania in May and then said that Sweden will contribute SEK 50 million.

The effects of the Russian ruble crisis had been underestimated in the 1999 budget work, forcing the government to tighten its austerity in 2000. In an effort to curb rising unemployment, the government cut corporate taxes, but in the autumn still went close to 12% without jobs. Many public employees had to wait for payroll, which included led to several teacher strikes.

The harsh economic reality made its mark on the campaign ahead of the October parliamentary elections. Former Communist and former President Algirdas Brazauskas promised social reforms and lower rates in the sale of state-owned enterprises. It gave electoral victory to his Social Democratic Alliance, which received 51 of Parliament’s 141 seats. The dissatisfaction hit the conservative government party Fäderneslandet, which managed to retain only 9 of its previous 70 seats. However, Brazauskas could not create a majority for a left-wing government. Instead, a social liberal middle government was formed with the Liberal League, which received 34 seats, and the New League, which took 29 seats in Parliament. The two-party government gained a majority through support from small parties. The Prime Minister became the leader of the New League, Vilnius Mayor Rolandas Paksas, who had been Conservative head of government for a few months in 1999 and subsequently formed the New League. Arturas Paulauskas, leader of the Liberal League, was appointed President of Parliament.

State and form of government
Constitution of 1992
Republic
Parliament (Seimas) with 141 members, election every 4 years
Direct election of the head of state every 5 years (one-time re-election)
Right to vote from 18 years.

Religions: 77% % Orthodox; Minorities of Protestants and Muslims, 6% without religion (status: 2006) 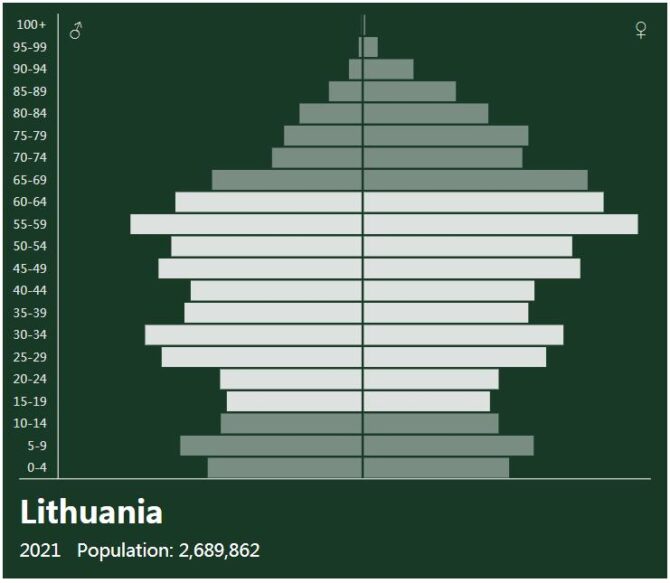