Ghana. In general elections in December, the ruling party, the National Democratic Congress (NDC), broke ground on the country. The party is led by Jerry Rawlings, who took power in a military coup on New Year’s Eve 1981 but who has been president-elect since 1992, when a democratic constitution was introduced. The NDC won big in the first two free elections, but now got seven seats fewer than the New Patriotic Party (NPP). In the presidential election, NPP candidate John Kufuor defeated Vice President John Atta Mills, who represented the NDC because Rawlings was not allowed to stand for re-election. Kufuor received nearly 57% of the vote and Atta Mills just over 43% in the second and decisive round of elections. The elections were conducted without more serious disruptions and were described as one of the freest and most democratic in Africa. Kufuor also promised to give government seats to non-NPP members.

An explosion at an Accra gas station in June 2015 killed about 250 people. Several days of rain and floods had caused hundreds of people to take refuge inside the gas station when the explosion occurred. That same month, several thousand people were chased out of their homes in Accra’s largest slum Old Fadama, also known by the name of Sodom and Gomora. The slum housed about 50,000 people. Police used tear gas and lace against protesters demonstrating against the forced removal.

In September, police attacked a peaceful demonstration with tear gas and lace, after disagreement over the demonstration route. The demonstration was organized by the Let My Vote Count Alliance and required the establishment of a new voter register. 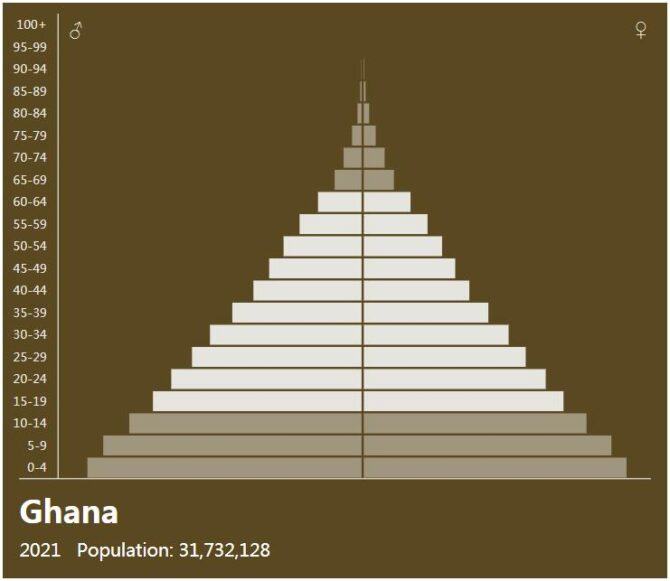 Population. – The just over 9 million residents of the Ghana they are distributed over 238,537 km 2 of territory with an average density of almost 40 residents per km 2, higher in the coastal regions and lower in the north without the significant imbalances characteristic of the other Guinean countries. The capital, Accra, has 850,000 residents; there are numerous other cities with a significant population (Kumasi, 350,000 residents; Tamale and Bolgatanga, about 100,000 residents, etc.). The percentage of urban population (24%) is very high for West Africa.

Economy. – Despite the Ghana being one of the most industrialized African countries, agriculture still has a very considerable importance, even though it occupies just over 50% of the assets, a very low percentage for Africa. In addition to being the world’s leading cocoa producer (almost 4.5 million q in 1972), Ghana devotes considerable effort to other market crops: peanuts, coffee, coconut and oil palms and, in recent years, pineapple, tobacco and citrus fruits. Subsistence crops for which the country had to resort to imports had been relatively neglected, but recently the government has given a significant boost to this sector: the productions of sorghum, millet, corn, rice and cassava are increasing significantly and steadily. The breeding has also enjoyed a notable expansion although it still does not allow self-sufficiency:

Among the mineral resources excel precious minerals such as gold and diamonds for which the country, famous for centuries, is now respectively in sixth and fourth place among world producers. More recently exploited minerals are bauxite and manganese (respectively 329 and 224,000 t in 1971); for the latter, the country is in seventh place in the world ranking of producers. In 1971, the extraction of oil from wells off the coast began. The energy situation of the Ghana is characterized by the presence of the immense reservoir lake on the Volta river created by the Akosombo dam; the waters of the lake, over 8000 km 2 wide, provide almost 3 billion kWh per year, but the power plants are susceptible to further expansion. The Ghana supplies energy to Togo and Dahomey.

The industry is highly developed and constantly evolving, such as to make the country stand out among those of West Africa. The sectors are very diversified: alongside the traditional processing of raw materials we find oil refineries, metallurgical and chemical plants, cement factories, shoe factories, textile and electronic industries in a range that is difficult to find in Africa. Tema, a port 20 km from the recently developed capital, houses a large refinery that produces almost one million tonnes of petroleum derivatives, a cement factory, an aluminum production plant that absorbs much of the electricity produced in Akosombo and others. industries. The main ports are Takoradi and Tema: both are close to 3 million tons of traffic per year, but in the former, exports prevail, in the other, imports. The approximately 1000 km of railways are concentrated in the southern part of the country.

The trade balance has an erratic trend, although it appears to have recently stabilized at decidedly positive values. Annual per capita income is around $ 250.