Cameroon. In October, work began on building a 107-mile-long oil pipeline from southwest Chad through Cameroon to the port city of Kribi. Behind the project, which is estimated to cost between $ 3.5 and $ 4 billion, is a consortium of oil companies Chevron Corporation, Petronas, Exxon and Mobil Corporation. The World Bank had approved the project and granted a $ 200 million credit. Management is expected to be able to be put into operation in 2004 and be in use for 25-30 years. During that period, it is expected to give Cameroon about $ 500 million in the form of transit fees and taxes and create thousands of jobs. However, environmental organizations have expressed strong concern that the oil pipeline will damage sensitive wildlife and waterways in Cameroon’s rainforest area. The risk that the income will only end up with the authorities is also considered to be imminent Cameroon.

Despite the corruption, Cameroon was approved for the World Bank and International Monetary Fund’s debt relief program. Debt amortization means that about $ 100 million is made available for a three-year period to be used for social development projects. 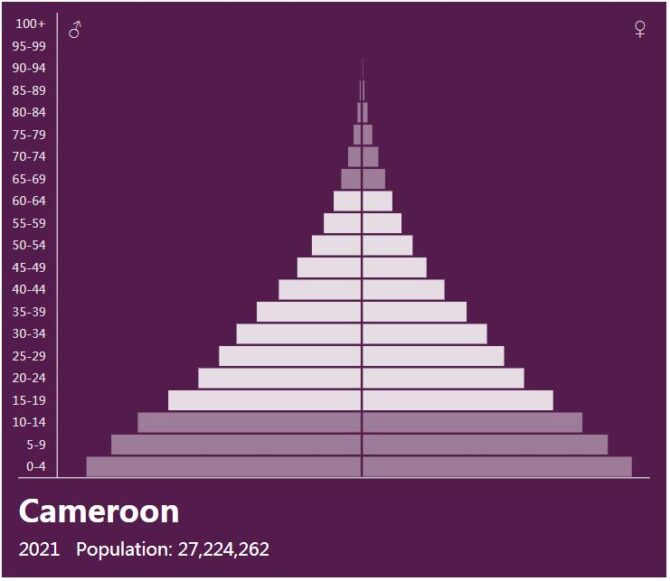 The social conditions of the population are still heavily backward, even if – compared to a decade ago – Cameroon has shown considerable vitality and has made good progress. Illiteracy still affects 40% of the population; there are 23,000 hospital beds and one doctor works for every 13,500 residents in the country. Life expectancy at birth is 54 years for males and 58 for females. According to estimates by the World Bank, per capita income (1988) amounts to 1010 dollars.

The economic situation of Cameroon is in constant evolution. During the 1980s, the concomitant contribution of oil and the agricultural sector allowed the country to achieve one of the highest development rates in the entire African continent (in real terms, the per capita income increased 3.6% per annum in the 1965-85 range; between 1980 and 1985, GDP increased by 8.6%, one of the highest in the world). The policy of diversification of agricultural crops has paid off, even if the problems of the sector remain serious (it hosts 62% of the active population and contributes only 21% to the formation of the total income). For this reason, also for the nineties, in the development plans, agriculture was given a priority interest and huge funding is foreseen to strengthen food self-sufficiency and to continue rationalizing crops destined for export.

Despite good progress in agriculture, the sector suffered extensive damage from the persistent drought of the early 1980s. Among the crops destined for export, cocoa (1.2 million q) and coffee (0.8 million q) are always the most important, contributing more than 50% to currency revenues. Other productions concern bananas (670,000 q), peanuts (1.4 million q), palm and sugar cane. On the other hand, maize (4.3 million q), millet (4 million q), cassava, rice, etc. are destined for local consumption. Breeding (4.4 million cattle, 5.8 million sheep and goats, 1.2 million pigs) and fishing are of great importance. The forestry heritage (52% of the country’s surface) is still scarcely exploited.

Oil (Rio del Rey), cassiterite and modest quantities of gold, silver and titanium are extracted from the subsoil. In perspective, the cultivation of iron deposits (Kribi) and, above all, of bauxite (Minim-Martrap) is planned. The fall in the price of hydrocarbons on international markets has led those in charge of the economy to stop the search for new fields.

The industrial sector is still poorly equipped. A plant for the production of aluminum (with Guinean minerals) located in Edéa, and an oil refinery (in Limba, formerly Victoria) whose production capacity is attested at 2 million tons per year are in operation. Other activities essentially concern the transformation of agricultural products. The country’s indebtedness is substantial, even if – expressed in relation to the income produced – it is among the least serious of African countries.