Krabi is easy to holiday in and is, after all, a pretty small area where you can very well focus on a few centers and resorts. The city of Krabi is a place to visit from all over Krabi at least once and often many times. It has the biggest attractions and provides better access to some places such as along the Pak Nam River than elsewhere.

The largest and most popular resort is Ao Nang, which is a lively but quite clean and harmless place to spend your holidays. Adjacent to it, Noppharat Thara is a less popular holiday destination, but it has its own strengths and in many travel guides and booking systems it is incorporated into Ao Nang, which is a very different place nonetheless. Located close to them, Railay is the fourth center of Krabi to spend a lot of holidays and is a paradisiacal peninsula worth visiting from all over Krabi during your stay. 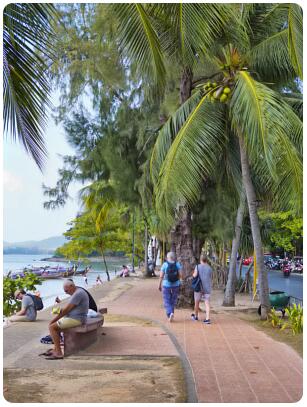 The city of Krabi

Krabi Town is a fairly small town in the heart of the Krabi area. The most important areas are along the main street and the promenade and almost everything essential is in the middle ground between them.

Maharat Road , also known in some contexts as “Maharaj Road” is the main street of Krabi town. It’s a wide street with the best spots at an intersection known in English as “Cro-Magnon Man Intersection”. It is next to the side street, Soi 10, and of the side streets on the main street, this is the most essential. The blocks on both sides of this side street are good for shopping, and there are also open-air stage (songthaew) trails to Ao Nang, Ao Luek and elsewhere. Between Soi 10 and Soi 8 is the Vogue department store, a large air-conditioned shopping paradise, with everything from clothing stalls to banana pancake bakers in front of it.

If you turn left at Soi 10, you will soon come across a small square at Soi 6 along the main street, with beautiful stairs at the end. They take you to a temple area called Wat Kaew , which is good to visit in the morning or afternoon. There are a few notable buildings there, and inside the temple, or pagoda, is also worth a visit. Before leaving the hill, it is worth inspecting the so-called. painting street (Painting Street), which runs next to the temple area and has various paintings. 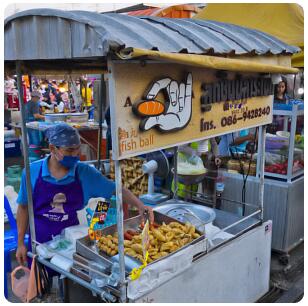 The main street is by no means the most pleasant street, but it is one of the most practical streets and its side streets towards the river are well worth a visit. Soi 10 is the street that leads past the market hall to the river bank, and along it is the City Hotel. Behind the hotel is the Walking Street Night Market, which runs from 5 pm to 5 pm . There are various places to eat along the street, the cheapest of which are in the market hall. Adjacent to the corner of Maharat Road, as well as along the main street itself but across the road, there are stalls selling good but inexpensive food from morning to early evening. However, there are no stalls every day, and Wednesday in particular is a day when many stalls and some others also have a holiday.

Soi 2, 4, 6 and 8 are pretty good shops and are worth a dip, as is the side street of Soi 10, a block from the riverfront on Phuksa Uthit Road with bars, restaurants and shops.

The best street in Krabi town is the promenade , which is officially called Uttarakit Road but has many different versions of the name. It is the best street in the city in terms of attractions, and there are numerous piers along it, from which both small and large ships can be reached near and far. Worth visiting are the various sculptures and other works of art that enliven the riverbank. The riverside is at its best after the rainy season, but as early as the end of January it is dry and an area whose parkland looks unclean. From Soi 10, the most important distant point is Kong Ka Pier (Khong Kha) [ on the map]. It leaves large ships for Koh Phi-Ph and Koh Lanta, and also leaves for Railay, which can also be reached from other Joenranta piers. Next to it is the Chao Fah Pier, from which ships also depart for the islands and beyond, and from there begins a park area whose name appears in the forms Chao Fah and Chaofah.

In front of Chao Fah Park , right next to the piers, there is a daily evening market where you can go out to eat after 5pm. However, the most significant and notable things in the park area and Joenranta are the various sculptures , which include old a sculpture depicting boats, eagle sculpture, Nok Awk, a sculpture depicting a hawk, and black a sculpture depicting a crab. Promenade is at its best in the afternoons, and it passes past the piers from which long tail boats travel to various places, such as the two rocky hills (Khao Khanab Nam) that have become symbols of Krabi , with caves at the foot and for which it makes sense to go only from the city of Krabi. You can view the hills, pose in front of them or take a picture of them in a place known in English as State Park. After that, the riverbank is no longer so comfortable to walk on, and if you want to explore more of the banks of the Krabi River (Pak Nam or Mae Nam Krabi), some sort of boat trip for that purpose is the best solution. 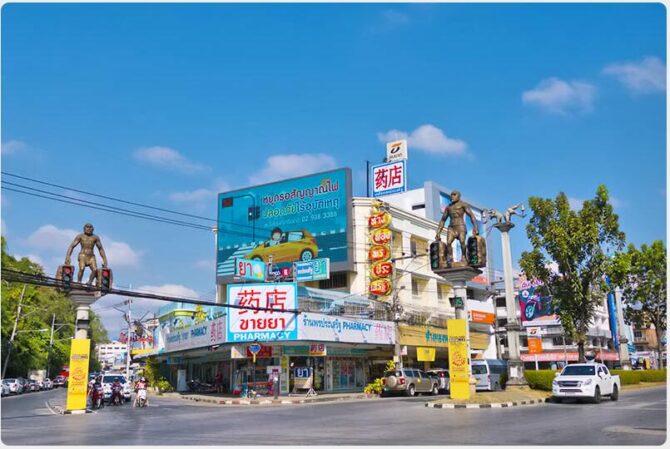