Looking at the sectoral structure of the economy, one recognizes the very large service sector (approx. 56.9% of the gross national product in 2017) compared to the other two areas of industry (approx. 31.7%) and agriculture (approx. 11.4%).

Despite the low share of the national product and an even lower share of total employment (4.4% in 2017), agriculture is of great importance, on the one hand as a source of income, but also as a development potential for the country, since the framework conditions for agricultural production are actually very beneficial are. 53% of the area of Kosovo can be used for agriculture, In 2017, 38% of the total area was cultivated, of which 45% as arable land and 52.1% as meadows and pastures. The population structure is rural, more than half of the population lives in rural areas. However, agricultural production is very subsistence-oriented. Therefore, Kosovo has to meet most of its agricultural product needs through imports. Around 90% of the arable land belongs to private individuals, but around 90% of it is also farmed on holdings of between 0.5 and 5 hectares. This means inefficient production on small areas that can not cover much more than the company’s own needs. As a result, agricultural incomes are among the lowest in Kosovo, while the vast majority of the rural population is poor or very poor. The main crops are wheat, maize, Rapeseed, potatoes and peppers, and fruit Viticulture plays a growing role.

According to PHILOSOPHYNEARBY, industry in Kosovo, which employed 30.3% of the workforce in 2017, remains heavily focused on mining, while manufacturing is underdeveloped and most of the facilities are outdated. The most important industrial sectors are metal, mining, building materials, food, textiles and wood. In the service sector, the areas of information and communication technology and tourism are relevant. Mining in particular has enormous development potential thanks to its wealth of resources. As a result, the lignite deposits in Kosovo are estimated at around 14.7 billion tons, which would be the fifth largest reserves in the world. However, as a result of climate change and the global conversion of the energy industry to non-fossil fuels, economic use is increasingly being questioned. In addition to lignite, Kosovo has extensive lead, nickel, chrome, nickel, bauxite, silver, magnesite and zinc deposits. The Trepça complex plays a central role in the extraction and processing of natural resources. Since the war in Kosovo and the ethno-territorial division of the group, the company has been producing and employing only a fraction of what it was in Yugoslavia for years. Problematic for the mining of the deposits and the development of the corresponding industry is the state of the same, which is characterized by years of mismanagement, a lack of investment and destruction during war. The uncertain legal situation is a hindrance to the desired privatization.

Further information on the importance of the company can be found at Duke University, the European Stability Initiative and the International Crisis Group.

A growing branch is the construction industry, which generated a share of 9.9% of the gross national product in 2017 and in which 12.9% of the employees worked.

In 2017, 65.3% of the workforce worked in the service sector. Central sectors are by far the real estate sector and the financial services sector, then transport and traffic as well as trade and information and communication technology. Tourism, which used to be insignificant, is playing a growing role, on the one hand through domestic tourism and winter sports tourism (in the winter sports area Brezovicë / Brezovica), on the other hand through the increasing number of guests from the Kosovar diaspora. 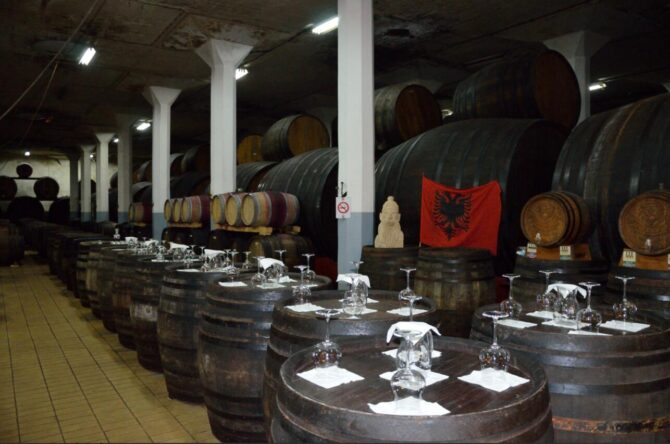 Foreign trade and integration in the world market

Kosovo’s historically determined, still poor integration into the world economy, combined with the structural weaknesses of its economy, weigh heavily on its foreign trade, which shows an extreme trade deficit. In 2018, exports of EUR 368 million were compared with imports of EUR 3.347 billion – a deficit of EUR 2.98 billion. Kosovo has been a member of the Central Europe Free Trade Agreement (CEFTA) since 2007 and of the International Monetary Fund (IMF) and the European Bank for Reconstruction and Development (EBRD) since 2012, but has only been a member of the World Bank since 2012 and of the European Development Bank since 2013(EIB). Kosovo is also a member of the following regional and European initiatives: Broadband Southeast Europe Initiative,, Electronic Southeast Europe Initiative, Energy Community Treaty, European Charter for Small Enterprises, European Common Aviation Area Agreement, Non-Tariff Barriers Removal Initiative, Regional Cooperation Council, South East Europe Transport Observatory, South-East European Cooperation Process.